Manlio Dinucci      The NATO Summit took place yesterday at NATO headquarters in Brussels: the North Atlantic Council meeting at the highest level of State and Government Leaders. It was formally chaired by Secretary-General Jens Stoltenberg, de facto by the President of the United States Joseph Biden, who came to Europe to call to arms his Allies in the global conflict against Russia and China. The NATO Summit was preceded and prepared by two political initiatives that saw Biden … END_OF_DOCUMENT_TOKEN_TO_BE_REPLACED

Space Attacks and Cyber Attacks Could Now Trigger Military Intervention Under Article 5 of the NATO Treaty.

The NATO proclamation—promoted at its annual summit this week (June 2021)—that a cyber attack could trigger Article 5 of the NATO treaty heightens the risk of military confrontation with Russia or China.

So does a new stipulation—announced at the summit—that space attacks could trigger Article 5. Russia has already been accused of testing space-based anti-satellite weapons, which could be adopted as a justification now for war.

Press release: “No to the domination of the USA via Nato” of 3 June 2021 from the French collective “non à l’OTAN, pnon à la guerre”. 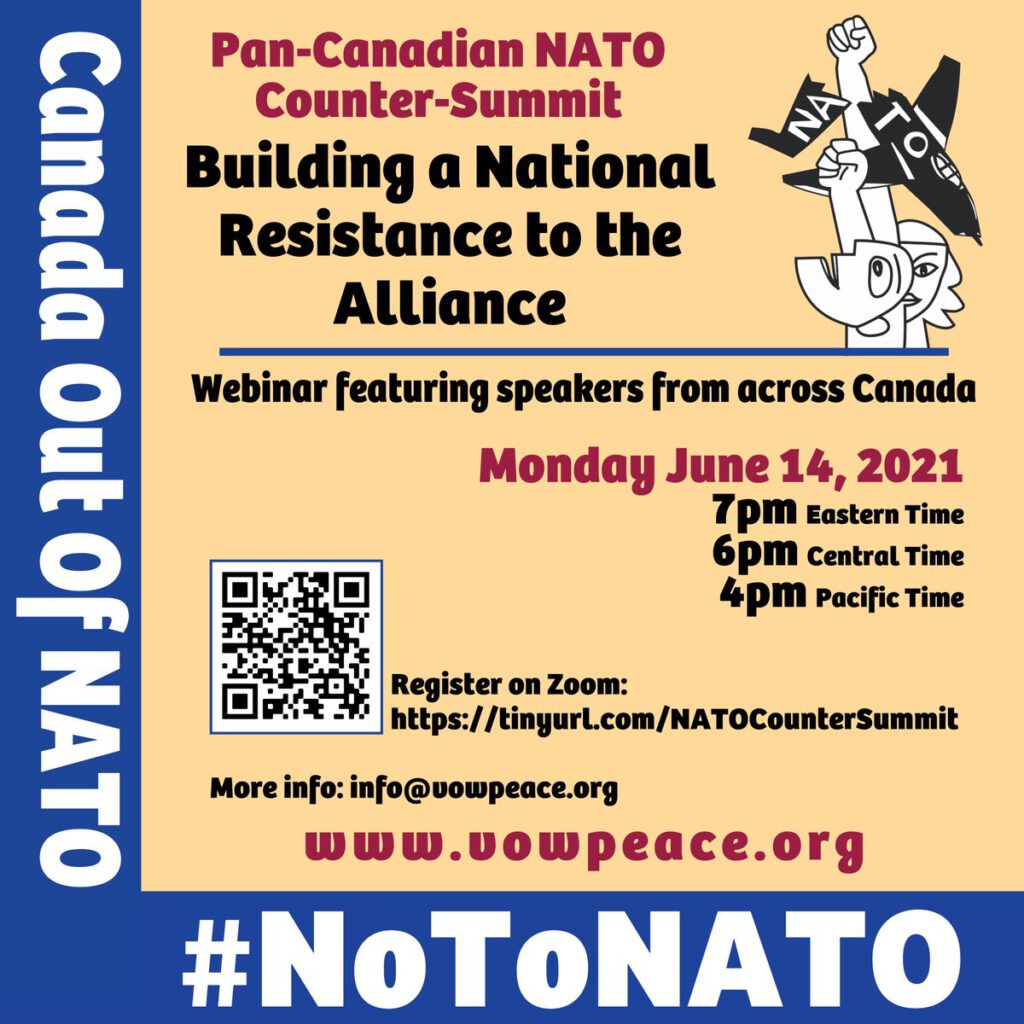 Comment by tine: this can only be a first step, the goal is clear: Dissolution of NATO – for solidarity, sustainability and disarmament As leaders from NATO states prepare for a summit in Brussels on 14 June, ICAN has released a major report arguing that members of the transatlantic alliance should embrace the UN Treaty on the Prohibition of Nuclear Weapons, which entered into force this January. ICAN is calling on NATO to take steps to become a “non-nuclear alliance”, … END_OF_DOCUMENT_TOKEN_TO_BE_REPLACED

by Rae Street The Morning Star, UK based daily paper, published the article  today, 10th June Recently, in reporting on the diversion of the Belorussian aircraft, an ITV commentator said of NATO, ‘seen as the world’s policeman’. So let us unpick that phrase.  Firstly, ‘the world’s’ and therefore global. From the time at the end of the Cold War when NATO began to expand its membership to include the former Soviet states up to the Russian border to in more … END_OF_DOCUMENT_TOKEN_TO_BE_REPLACED 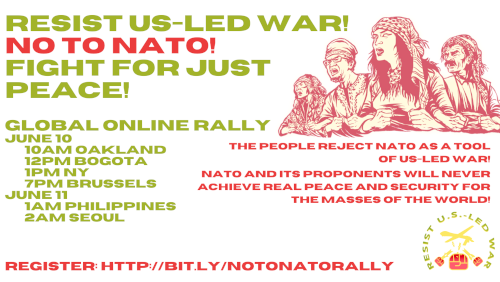 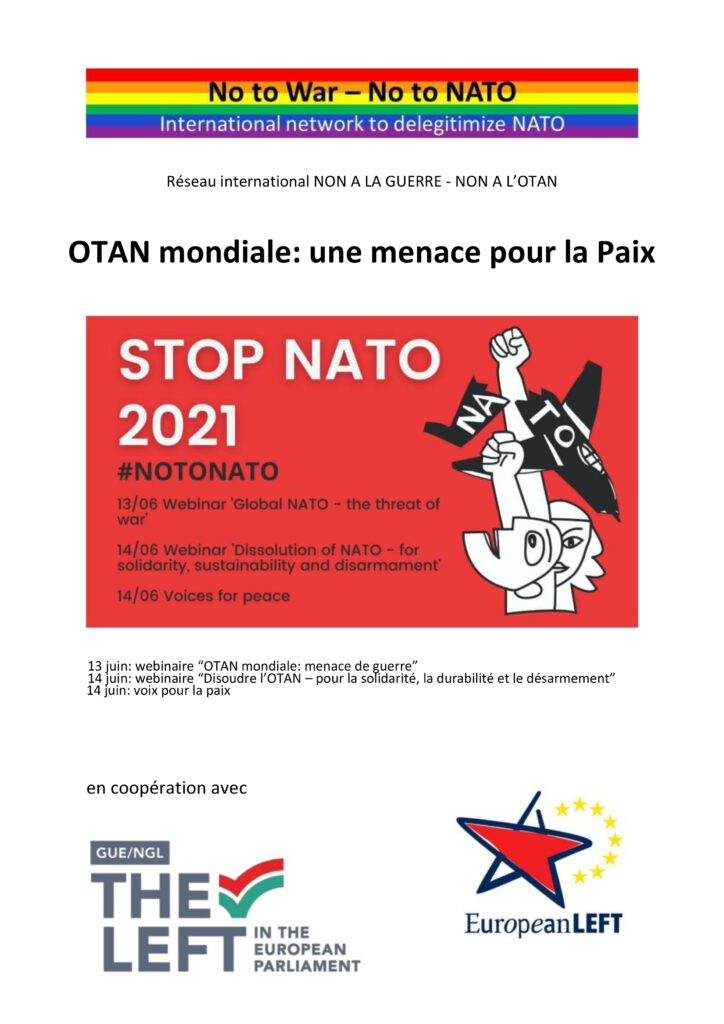 Voices for Peace – you !!! can protest against NATO

by Yurii Sheliazhenko Transcript of a presentation delivered at the International Peace Bureau’s webinar on the dangerous US/NATO/Russia/Ukraine maneuvers 5 May 2021. (Video from the webinar: webinar-discussion-about-the-dangerous-us-nato-russia-ukraine-maneuvers-2021-05-05-video/) My main point is to urge you against seeing whole problem only in the Ukraine crisis. Let’s see the big picture. War in Ukraine started in the interests of superpowers. It is a war for status quo, for a cold-war-like world. United States and Russia treat Ukraine and European Union like a chessboard … END_OF_DOCUMENT_TOKEN_TO_BE_REPLACED

On this show we are speaking with Angelo Cardona about the First Youth Summit Against NATO. https://www.pressenza.com/2021/05/face-2-face-with-angelo-cardona/

Commemorate end of WWII! To commemorate the end of World War II in Europe we invite to the webinar on the 8th of May 2021 at 10:00 am CEST with the title:   Never again! We need a new detente! We all know that World War II brought about one of the biggest disasters of human mankind to the world. The present escalation of military activities around Russia and the information war between West and East reminds us of the … END_OF_DOCUMENT_TOKEN_TO_BE_REPLACED

NATO Expansion: An Idea Whose Time Has Gone?

The Ukrainian government has issued a new request for an Action Plan leading to NATO membership, even as the situation on the ground between Ukrainian and Russian-backed forces in eastern Ukraine has deteriorated badly, as have U.S.-Russian relations.

What is going on?? And how dangerous is the situation?
Speakers are Bruce Gagnon, Elizabeth Murray, Yuri Sheliazhenkol, Reiner Braun 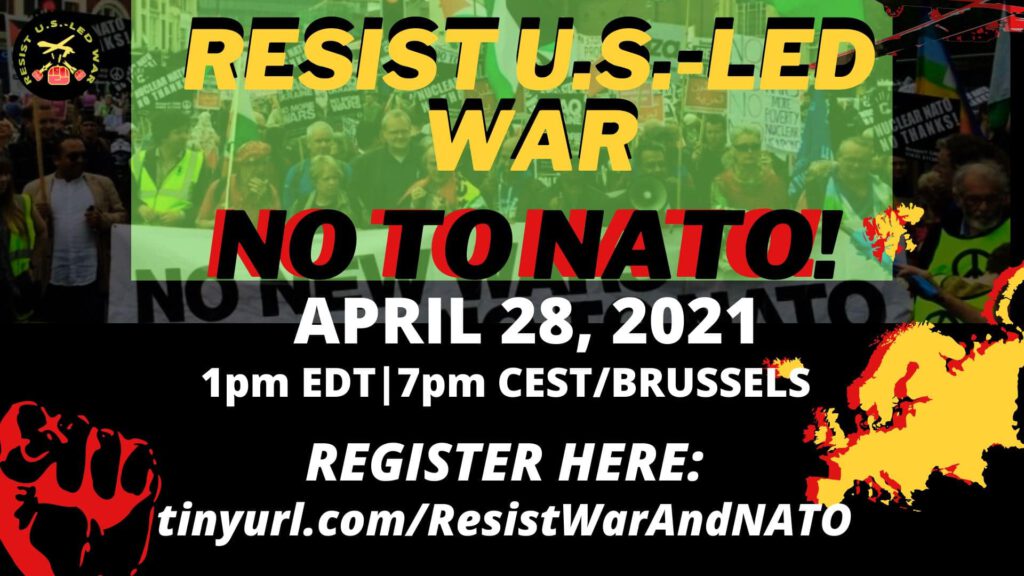 Topic: Prepare Counter Actions Against The Next NATO Summit on June 14th, 2021 in Brussels, Belgium

Let’s discuss what to do to get rid of NATO and militarism!

What can women distribute to the planned actions online and offline in Brussels or at home, see https://www.no-to-nato.org/actions-around-nato-summits/actions-and-articles-nato-summit-14-june-2021-brussels/

What is going on?? And how dangerous is the situation? Speakers are Bruce Gagnon, Elizabeth Murray, Yuri Sheliazhenkol, Reiner Braun Events in the U.S./NATO/Ukraine challenge to Russia have been moving at a frenetic pace. Ukraine increased deployment of military troops to the eastern provinces on the border of Donbass. Russia predictably responded by mobilizing a large part of its military to meet the Ukraine threat. In another incident, the US publicized two U.S. warships heading into the Black Sea; Russia … END_OF_DOCUMENT_TOKEN_TO_BE_REPLACED

+++ SAVE THE DATE +++ SAVE THE DATE +++ Topic: NATO is weaponizing the UN resolution 1325* women, peace, and security (WPS) The women against NATO network meeting will take place on 25. April 2021 (Sunday 11am PDT (UTC-7) / 2pm EDT (UTC-4) / 8pm CEST (UTC+2). Join Zoom Meeting https://us02web.zoom.us/j/81992604540?pwd=aGFNK3dwQnVKK1dIaWZPbXdFT0lxQT09 The following speakers will give us a short input and afterwards will have a discussion, with the aim to strengthen our activities against the war machine NATO.

END_OF_DOCUMENT_TOKEN_TO_BE_REPLACED 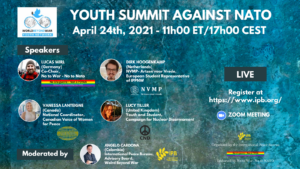 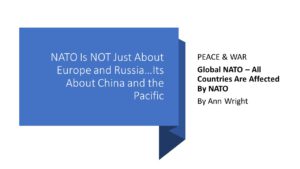 Discussing Actions & Activities in 2021 for a Nuclear Weapons Free Europe

To learn more about the networks appeal and call for actions visit: www.nukefreeeurope.eu

A response to the official
NATO Reflection Group

organized by the campaign Stopp Air Base Ramstein, the international “No to War – no to NATO” network, the International Peace Bureau

with the support of GCOMs

by Ludo De Brabander, March 2021 Last year a 10 member-group of “experts” published the report, ‘NATO 2030: United for a New Era’ on the request of NATO-Secretary-General Stoltenberg. He tasked them to reflect on NATO’s future and its challenges after French President Macron called the military alliance “brain dead” on the eve of the NATO summit in London (3 and 4 December 2019). The ‘experts’ put forward 138 recommendations on how NATO should adapt for the next decade. This … END_OF_DOCUMENT_TOKEN_TO_BE_REPLACED

by Manlio Dinucci The NATO Dynamic Manta anti-submarine warfare exercise took place in the Ionian Sea from February 22 to March 5.  Ships, submarines, and planes from the United States, Italy, France, Germany, Greece, Spain, Belgium, and Turkey participated in it. The two main units involved in this exercise were a US Los Angeles class nuclear attack submarine and the French nuclear-powered aircraft carrier Charles de Gaulle together with its battle group, and a nuclear attack submarine was also included. … END_OF_DOCUMENT_TOKEN_TO_BE_REPLACED

A response to the official NATO Reflection Group

What Planet Is NATO Living On?

After three quarters of a century, it’s clear the alliance has done much more harm than good.

Webinar: “NATO and the Patriarchy” with Ray Acheson

Sunday, March 7
(11am PT/ 2pm ET / 8pm CET)
In celebration of International Women’s Day
Ray Acheson is the Director of Reaching Critical Will, the disarmament program of the Women’s International League for Peace & Freedom (WILPF).

here are short minutes of our productive ICC meeting 16.02.2021 participants: Alain Rouy, Ann Wright, Ingela Martensson, Kate, Hudson, Kristine Karch, Ludo De Brabander (at the beginning), Medea Benjamin, Reiner Braun, Tamara Lorincz (later), Yves-Jean Gallas. Agenda: paper NATO2030 evaluate the webinar about NATO2030 we had a very interesting and productive webinar with about 35 persons. It is important to take more attention to this paper, even if the topics are not new, but never announced in this confrontational way. … END_OF_DOCUMENT_TOKEN_TO_BE_REPLACED

Hello friends.  The article below was printed in the UK daily paper, the Morning Star, and in the current newsletter of END – European Nucleaclear Disarmament – from the UK Bertrand Russell Peace Foundation. NATO 2030 – United for a New Era NATO recently commissioned a report on the future of NATO from ten experts appointed by the Secretary- General, Jens Stoltenberg.   It opens with congratulations to themselves, as according to the authors, NATO is the ‘most successful alliance in … END_OF_DOCUMENT_TOKEN_TO_BE_REPLACED

NATO 2030 DISCUSSION February 4, 2021 TAMARA’s PRESENTATION NATO 2030 arose from the declaration from the NATO Summit in London in December 2019 – the declaration called on NATO Secretary General Jens Stoltenberg to initiate a “proposal for a forward-looking reflection process, drawing on relevant expertise, to further strengthen NATO’s political dimension” In March 2020 – Stoltenberg appointed a group of 10 experts for the NATO 2030 – 5 men and 5 women  (https://www.nato.int/nato_static_fl2014/assets/pdf/2020/11/pdf/201125-nato2030-experts.pdf) In June 2020 – Stoltenberg announced … END_OF_DOCUMENT_TOKEN_TO_BE_REPLACED

First International Day of Action against Foreign Military Bases April 30th organized by the campaign Stopp Air Base Ramstein, the international “No to War – no to NATO” network, the International Peace Bureau with the support of GCOMs Resistance is the urgent challenge! We are calling for an INTERNATIONAL DAY of resistance to the approximately 1,000 military bases around the world, on which people can come together in strength and solidarity. Our solidarity is especially directed toward actions against the … END_OF_DOCUMENT_TOKEN_TO_BE_REPLACED

POSTPONED due to the preparation of counter actions against the next NATO summit on June 14th, 2021 in Brussels.