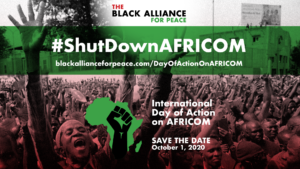 Week of January 25-30, 2021 | (Virtual – and face-to-face when possible)
Organizations and social movements from all over the world are invited to build together the next edition of the World Social Forum and to participate in its activities that will take place in the week of January 25-29, 2021, basically virtually, but also in places where it is possible to carry them out with sanitary security. https://wsf2021.net/

Following up with our previous discussions, we would like to invite you to the next International Action Meeting for a nuclear weapon free Europe.

We will focus on the impact of next the entry into force of the TPNW on January 22nd, especially in European nuclear weapon hosting states and nuclear weapon owning states.

The key note speaker will be Susi Snyder from PAX (Nederland), member of ICAN International Steering Group, and Director of Don’t Bank on the Bomb Campaign. 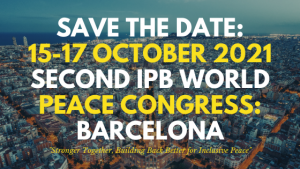 IPB is excited to announce the tentative dates for our large gathering next year – a follow-up to IPB’s 2016 World Peace Congress in Berlin – provisionally entitled the Second IPB World Peace Congress Barcelona 2021: Stronger Together, Building Back Better for Inclusive Peace. We … Read more (https://www.ipb.org/uncategorized/save-the-date-ipb-world-peace-congress-barcelona-2021/) 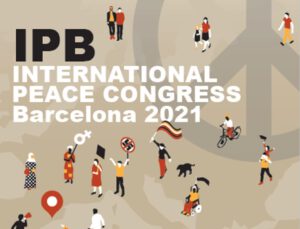 Also the IPB Youth Network (http://ipbyn.org/) has its own mobilisation for the International Peace Congress in Barcelona 2021

„The European Spring is Necessary“

“The Pentagon reported Monday the redeployment of an F-16 fighter squadron from Spangdahlem Air Base in Germany to Al-Dhafra Air Base in Abu Dhabi in what an Air Force commander told the media was a demonstration of “CENTCOM’s commitment to allies and partners to bolster security and stability in the region.”
https://www.wsws.org/en/articles/2020/11/18/pers-n18.html?fbclid=IwAR2usKjxTGHO2c6o9FcNBiurqRctPbcZa97DqLPaYWuL-Zt6OT-k2s7csAc 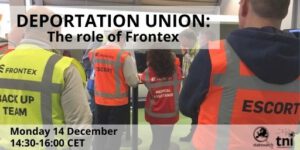 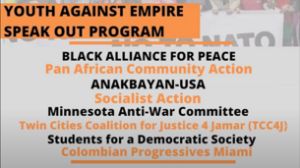 Attend the next webinar of the Youth Against Empire 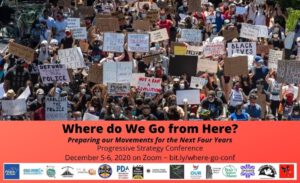 Peace Is Not Just For Xmas – Aldermaston Women’s Peace Camp 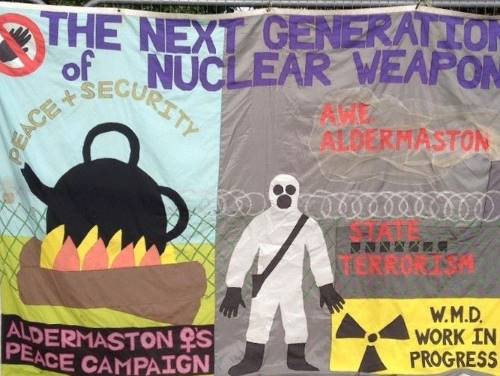 Join us on December 16 at 3:00pm ET (GMT-5) for an interesting webinar on “Divest from War through Farming, Permaculture, & Simple Living”! 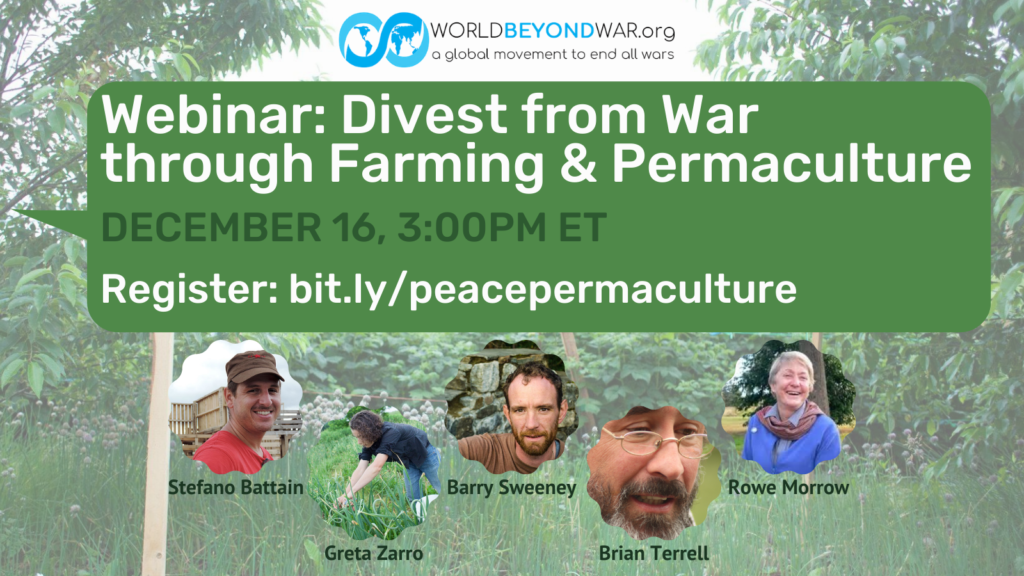 The IPB organized the event and invited four US peace and social activists to share their insights with us:
Joseph Gerson, president of the Campaign for Peace, Disarmament and Common Security | Emily Rubino, Director of Policy and Outreach at Peace Action New York State | Paul Martin, Senior Director for Policy and Political Affairs at Peace Action | Daunasia Yancey, founder and organizer of the Boston chapter of the Black Lives Matter Global Network | The event will be chaired by Lisa Clark, IPB Co-President. (https://youtu.be/-MqXHUmIGsk) 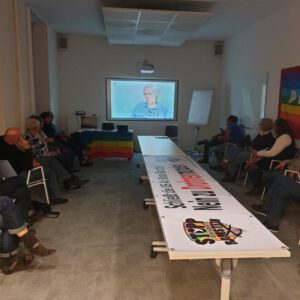 The citizen movement NO MOUS is composed of a network of local committees, which are responsible for regional coordination, and other organized groups. In the founding declaration, adopted on November 18, 2012, MUOS is described as “a non-partisan and non-denominational movement that can be joined individually; it is composed of different people and cultures and diverse political beliefs, but all of them have committed themselves to the indispensable values of freedom, equality, solidarity, anti-fascism, anti-militarism, anti-racism and the fight against … END_OF_DOCUMENT_TOKEN_TO_BE_REPLACED

by Medea Benjamin – Nicolas J. S. Davies November 11, 2020 COUNTERPUNCH Congratulations to Joe Biden on his election as America’s next president! People all over this pandemic-infested, war-torn and poverty-stricken world were shocked by the brutality and racism of the Trump administration, and are anxiously wondering whether Biden’s presidency will open the door to the kind of international cooperation that we need to confront the serious problems facing humanity in this century. www.counterpunch.org/2020/11/11/will-the-biden-team-be-warmongers-or-peacemakers

END_OF_DOCUMENT_TOKEN_TO_BE_REPLACED 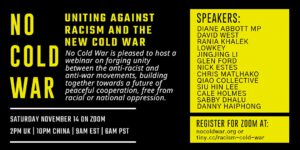 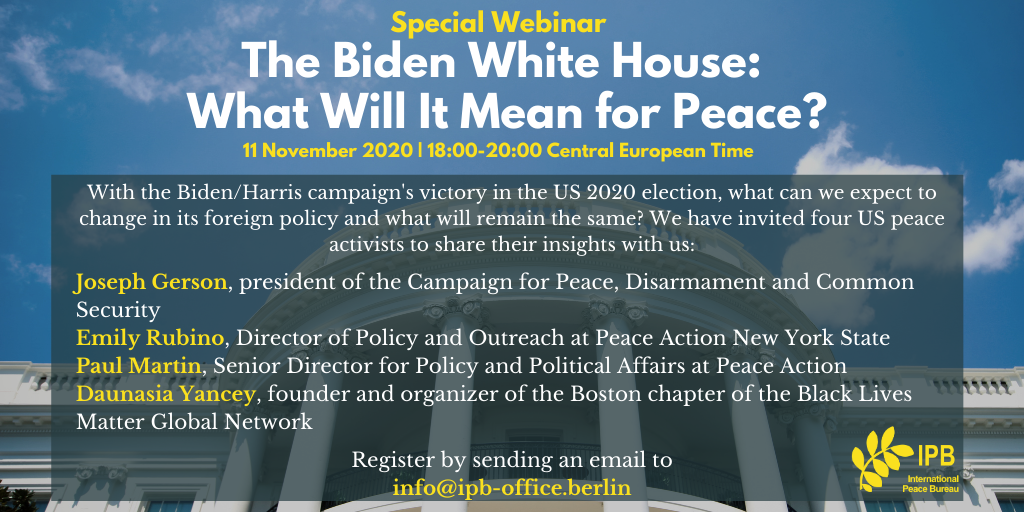 On December 3 (14 hours Central European Time) we willl be hosting together with the Asia-Europe People’s Forum a webinar on Military Spending & Global (In)Security to discuss how current levels of military spending condition our  global emergencies. Speakers include: Michael T. Klare, Binalakshmi Nepram, Tarja Cronberg and Walden Bello, and moderators will be Jordi Calvo and Corazon Valdez Fabros. More details will come soon. Please save the date. END_OF_DOCUMENT_TOKEN_TO_BE_REPLACED END_OF_DOCUMENT_TOKEN_TO_BE_REPLACED

I Lost 39 Members of My Family in the Holocaust, Jeremy Corbyn is No Antisemite | Andrew Feinstein (https://youtu.be/VMc_0gaeoBU)

On 24 October, No Cold War hosted a very successful and interesting dialogue between Zhang Weiwei (professor of international relations at Fudan University, former interpreter to Deng Xiaoping, and author of several books including the best-selling The China Wave: Rise of a Civilizational State) and Jeffrey Sachs (a leading expert in sustainable development, former director of The Earth Institute at Columbia University, and author of several books including the influential The End of Poverty). The online event was attended by … END_OF_DOCUMENT_TOKEN_TO_BE_REPLACED

Will the US Presidential Election Change the New Cold War? (Saturday 7 November) Saturday 7 November 7am (US Eastern), 12pm (UK), 8pm (China). US, Chinese and other experts opposing a New Cold War will analyse the consequences of the outcome of the US presidential election. President Trump launched a New Cold War against China which has led to a dangerous rise in global tensions. It is a decisive part of an aggressive ‘America First’ foreign policy which has also involved … END_OF_DOCUMENT_TOKEN_TO_BE_REPLACED 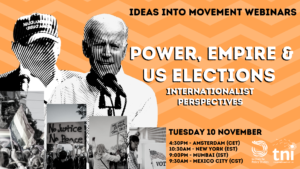 Abrüsten statt Aufrüsten (disarming instead of investing in arms) – a new policy of détente now! The ghost of the Cold War has returned. The world is on the verge of peace, for it becomes a fragile entity. The cancer of nationalism is spreading. Social inequalities are becoming more acute. The global climate crisis is threatening humanity. Wars and destruction of nature are crucial reasons for flight and expulsion. The Corona pandemic is proof that the social and environmental layers … END_OF_DOCUMENT_TOKEN_TO_BE_REPLACED 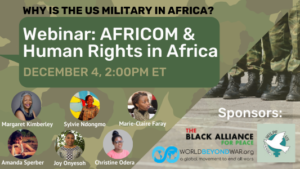 What: Free Webinar: AFRICOM & Human Rights in Africa
When: Friday, December 4 at 11:00AM PT / 2:00PM ET / 7:00PM Nigeria Time
How to join: Register here for the Zoom info (https://actionnetwork.org/events/free-webinar-africom-human-rights-in-africa)
Invite your friends and share it on Facebook! (https://www.facebook.com/events/3569356163123820)

Joseph Gerson* November 4, 2020 In the run up to the U.S. election, Daniel Ellsberg, the courageous whistleblower who risked 115 years in prison in the early 1970s for revealing the Pentagon’s secret in his effort to stop the killing, wrote that the country was “facing an authoritarian threat to our democratic system of a kind we’ve never seen before.” Despite differing with Biden on many issues, he urged people to vote for Biden  “to free the nation from Trump’s … END_OF_DOCUMENT_TOKEN_TO_BE_REPLACED

Dear NATO Secretary General Jens Stoltenberg, We want to voice our opposition to the fact that you will host the NATO 2030 Youth Summit on November 9th. As young people concerned about our future and the future of our planet, we are very concerned that the focus of the event is ‘keeping NATO strong militarily, making it stronger politically and more global’. We do not believe that strengthening NATO is the best way to secure our future. Instead we would … END_OF_DOCUMENT_TOKEN_TO_BE_REPLACED

UN Nuclear Treaty achieves 50th ratification for Entry into Force on 75th anniversary of UN’s founding London, 24 October 2020: The United Nations has confirmed that the 2017 Treaty on the Prohibition of Nuclear Weapons (TPNW) has been ratified by its 50th state party, Honduras, and will therefore enter into international legal force 90 days later, on 22 January.      “This Treaty bans nuclear weapons production, testing, possession and use, along with other activities that could enable and assist anyone … END_OF_DOCUMENT_TOKEN_TO_BE_REPLACED