First photos, videos and reports are online, more are coming soon, including some speaches of the counter summit.

Real Russia in the real world Myths, conflicts and provocations Anna Ochkina Western perception of Russia is distorted by propaganda, traditional myths and stereotypes. The same can be said about Russian perception of the West. The difference, however, is that in Russia considerable section of society doesn’t take official propaganda seriously and stereotypes are very much undermined by practical experience given the fact that millions of Russians travel abroad, many lived abroad and many people have relatives living abroad. Moreover … END_OF_DOCUMENT_TOKEN_TO_BE_REPLACED

EU militarization & NATO Ludo De Brabander (Vrede vzw) Washington, 2 april In June 2016, Federica Mogherini, the High Representative for the Common Foreign and Security Policy, presented the Global Strategy for the European Union’s Foreign and Security Policy. It came thirteen years after the first European Security Strategy (2003) and is supposed to give direction to the EU foreign and security policy in the coming years. Absence of European responsibility Mogherini’s Global Strategy offers little room for self-criticism. The … END_OF_DOCUMENT_TOKEN_TO_BE_REPLACED

Common Security Talk Joseph Gerson NATO Counter-Summit Conference – April 2, 2019 This is not going to be a traditional peace movement talk. I want to begin by naming a contradiction that I have long lived with. I am a pacifist and anti-imperialist. I also think that we must walk and chew gum at the same time: pressing broad and urgent demands like ending the Yemen War, preventing war with Iran and Venezuela, and demanding nuclear weapons abolition and ending … END_OF_DOCUMENT_TOKEN_TO_BE_REPLACED 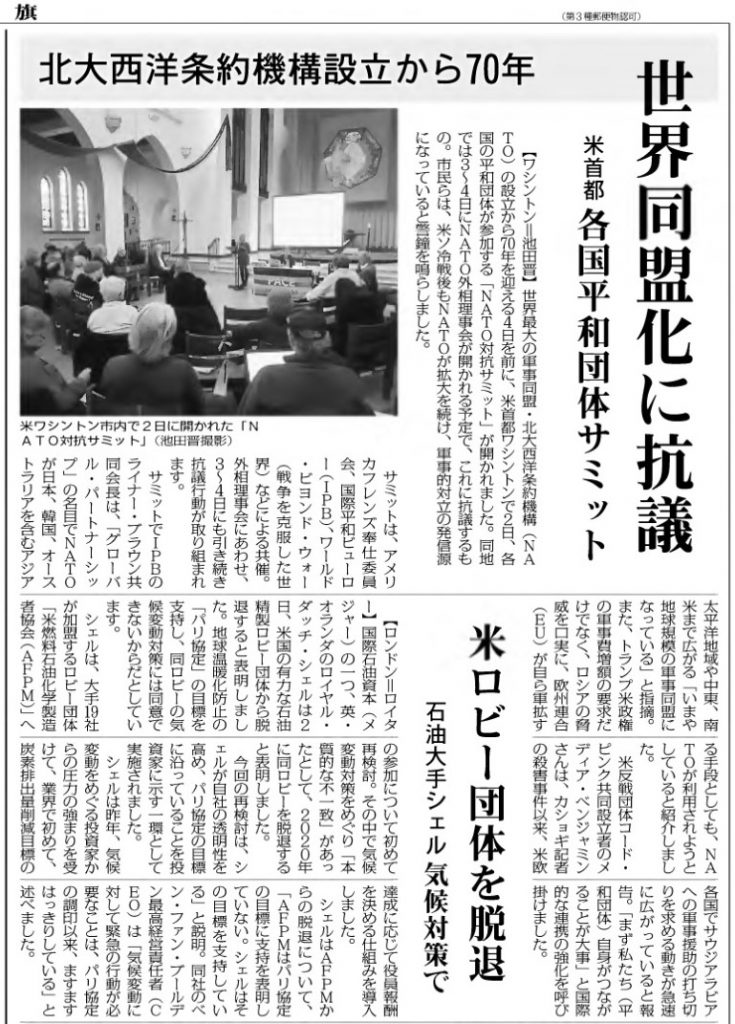 END_OF_DOCUMENT_TOKEN_TO_BE_REPLACED

The risk of a vast war which, with the use of nuclear weapons, could mean the end of Humanity, is real and growing, even though it is not noticed by the general public, which is maintained in the ignorance of this imminent danger. A strong engagement to find a way out of the war system is of vital importance. This raises the question of the affiliation of Italy and other European countries with NATO. NATO is not an Alliance. It … END_OF_DOCUMENT_TOKEN_TO_BE_REPLACED 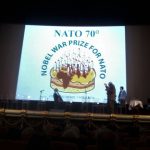 Here a selection of some short video clips.

Ben Grosscup “We Say NATO’s Got to Go”

Luci Murphy & Ben Grosscup “We shall not be moved”

Protesting the NATO’s 70th anniversary: The peace movement’s counter-actions in Washington & the NATO’s Ministerial Summit by Reiner Braun & Kristine Karch, “No to war – no to NATO” International Network On the 30th of March 2019, with wonderful spring weather, about 1000 people demonstrated near the White House, in Washington DC, for the overcoming and dissolution of NATO. This was the prelude to several protest actions that would take place throughout the week, on the occasion of the NATO’s … END_OF_DOCUMENT_TOKEN_TO_BE_REPLACED

Actions and activities of the last 2 years
Presentation at the annual meeting 01.04.2019 in Washington DC

Internationalist Front (FAI) has organised a rally in front of the US embassy in Madrid, Spain. We are forwarding the report from the rally and the statement that was read. After an intense but brief hailstorm, some 50 people accompanied the representation of “the NATO clown”, with a satirical interpretation of the role in security and stability that politicians and the mass media try to convince us NATO plays and of the complicity of the Spanish state and the cession … END_OF_DOCUMENT_TOKEN_TO_BE_REPLACED

An AFP story, picked up by Reuters, JIJI in Japan, and lord knows what other outlets quotes me to the effect that NATO should have been retired and is now a global alliance.
You’ll find it at https://www.japantimes.co.jp/news/2019/03/31/world/donald-trump-critical-nato-looms-bodys-70th-anniversary-meeting/#.XKLMyZhJFPY 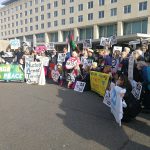 The foreign minister meeting took place at State Department / Harry S. Truman Building. At the beginning, when the  foreign ministers arrived, we could demonstrate without barriers, later they put some between us and the entrence, because some of us made a sit-in on the street. Here a selection of some short video clips.

END_OF_DOCUMENT_TOKEN_TO_BE_REPLACED

We gathered at 7:30 a.m. at the Albert Einstein Memorial (2101 Constitution Ave NW) or across Constitution Ave if need be — very near where the NATO foreign ministers will be meeting. At 8:00 a.m. we heared from our speakers and musicians outside the State Department, protest NATO, and greet meeting attendees. Speakers and musicians will include: Ben Grosscup, Luci Murphy, Megaciph, Art Laffin, Ludo De Brabander, Kristine Karch, Phil Wilayto, Medea Benjamin, Ann Wright.   ©

END_OF_DOCUMENT_TOKEN_TO_BE_REPLACED

“This text prepared in the context of the April 7 2019 Florence International Conference: No War, No NATO will centre on the key relationship between US-NATO military operations directed against targeted countries and the imposition of  far-reaching neoliberal economic reforms both before and in the wake of US-NATO military interventions. …”

Report by David Swanson about an action. Wednesday (03.04.2019 Washington) morning an event was held in a building overlooking Freedom Plaza in Washington, D.C., at an organization called the Center for European Policy Analysis, which is funded by: FireEye, Lockheed Martin, Raytheon, Bell Helicopters, BAE systems, the U.S. State Department, the Pentagon, National Endowment for Democracy, the U.S. Mission to NATO, and NATO’s own Public Diplomacy Division.

No to NATO – Yes to Peace Festival 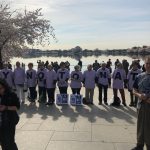 This year we managed to use the No to NATO – T-Shirts on serveral events. First was a test a the Peace Festival Evening April 3rd 2019   Second was during the counter actions in  front of the meeting place of NATOs foreign ministers (State Department / Harry S. Truman Building)   Third we marched from there to the Lincoln Memorial     and fourth we were part of the ralley on the Martin Luther King Memorial on April 4th, … END_OF_DOCUMENT_TOKEN_TO_BE_REPLACED

Mobilization to opose NATO, War and Rassism – Hands off Venezuela

Nato 70 years – Protests and events in Denmark March 30 Copenhagen Street theatre / action: Skeletons out of the closet Its 70 years ago Nato was founded. It’s time to retire Nato. We do a street-theater-action 4 places in Copenhagen saturday march 30. 10am-3pm. We seek cool and nice people that wants to participate. Good voices, aktivists, artists, signkeepers, photographers. www.facebook.com/events/500111493852538/ Contact Nato claims to strive for collective defence and preserving peace and security. But Nato is the … END_OF_DOCUMENT_TOKEN_TO_BE_REPLACED