CODEPINK Works For Peace and Justice for All People and Stands Against Hate and Prejudice in All Forms CODEPINK INTERNATIONAL PRESS RELEASE February 26, 2016 — Yesterday the Israeli Embassy in Germany strongly objected to the city council of Bayreuth’s vote on Wednesday to confirm that the U.S. peace and civil-rights organization CODEPINK will receive the 2016 Wilhelmine-Tolerance Prize from the city in a public ceremony on April 15th. CODEPINK was founded in 2002 and is led by women. CODEPINK … END_OF_DOCUMENT_TOKEN_TO_BE_REPLACED

No to War – No to Militarism – Yes to Refugees

The next NATO summit is planned to take place in Warsaw on 8-9 July. This summit will be held during a period of wars, heightened global instability and conflict. The wars raged by the West in the Middle East and Afghanistan have left hundreds of thousands dead; destroyed these countries’ infrastructure and ruined the conditions for political stability and social peace. The terrorism that has spread around the world is a terrible legacy of these conflicts. END_OF_DOCUMENT_TOKEN_TO_BE_REPLACED END_OF_DOCUMENT_TOKEN_TO_BE_REPLACED

END_OF_DOCUMENT_TOKEN_TO_BE_REPLACED 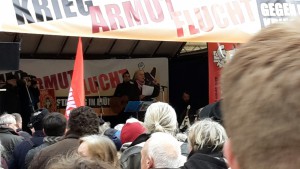 The Pentagon’s announcement that it will quadruple US-NATO military forces in countries on or near Russia’s borders pushes the new Cold War toward actual war, possibly even a nuclear one.

Hello Friends, On this side of the Atlantic there’s very little mainstream reporting about NATO, certainly almost nothing about NATO member Turkey serving as a corridor for fighters and arms to reach ISIS in Syria or criticism of U.S. and NATO support for Turkey after the downing of the Russian warplane after being over Turkey at most for 17 seconds, if at all. So, it’s significant that today’s New York Times ran a ¾ page article titled “NATO Nations No … END_OF_DOCUMENT_TOKEN_TO_BE_REPLACED

IPB Co-President Reiner Braun writes: A large peace heart has ceased to beat. Andreas Büro, one of the mentors of the German peace movement, has passed away at the age of 87. He was active in the peace movement for the last 50 years, with the Easter marches being associated with his name since their inception,  and countless large and small actions. He was a leader in the large demonstrations of the 1980s and was active until his death in … END_OF_DOCUMENT_TOKEN_TO_BE_REPLACED

BERLIN (Own report) – In view of the NATO Summit scheduled this year in Warsaw, the deployment of nuclear arms against Russia is being discussed within the German military and think-tanks. The Federal College for Security Studies (BAKS), for example, accuses Moscow of “neo-imperial aggression” against Eastern Europe and calls for a revival of the “nuclear deterrence” strategy. According to BAKS, the idea of a nuclear weapons-free world should be considered as “unrealistic” – after all, “disarmament is not the … END_OF_DOCUMENT_TOKEN_TO_BE_REPLACED 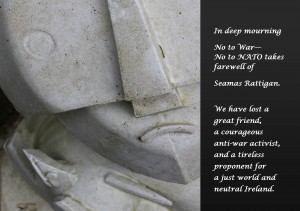 In deep mourning
No to War—No to NATO
takes farewell of Seamas Rattigan.

We have lost a great friend, a courageous anti-war activist, and a tireless proponent for a just world and neutral Ireland.

Dear Friends As you all know, this year, the UK Parliament is set to vote on whether or not to replace the British Trident nuclear weapons system at an estimated cost of over £180 billion ($260 billion) and at a time when the government is slashing public spending on vital areas such as education, health and welfare services. The majority of people of the world want to see positive steps taken towards global nuclear disarmament – but talks and negotiations … END_OF_DOCUMENT_TOKEN_TO_BE_REPLACED