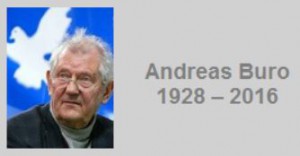 A large peace heart has ceased to beat. Andreas Büro, one of the mentors of the German peace movement, has passed away at the age of 87. He was active in the peace movement for the last 50 years, with the Easter marches being associated with his name since their inception,  and countless large and small actions. He was a leader in the large demonstrations of the 1980s and was active until his death in the peace initiatives of Taunus, his home town. His scientific work, theoretical considerations and his practical work influenced diverse peace movements of very different political and social tendencies. An undogmatic leftist (his own description) and a person of great charisma, he worked on many inspirational initiatives to promote civilian conflict resolution.  The relevant dossiers of Cooperation for Peace (German umbrella group) will be linked forever with his name. Until recently, he was developing ideas for a peaceful solution via the project: ‘Ukraine: a bridge between East and West’ which was a campaign for cooperation, and one of the last projects he pursued. He will forever be remembered as a man of good conversation, togetherness and mutual learning. He will be sorely missed. We shall have to continue the work without him, but in his spirit.