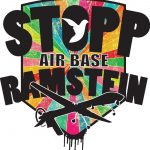 Friday June 29th start at 12.00 noon – 6.00 pm Church of Reconciliation, Leipziger Straße 5, 67663 Kaiserslautern Program of the international meeting against foreign military bases 11.00 am Opening and welcome (Kristine Karch) 11.15 am – 11.30 am Round of introduction Moderation: Ann Wright / Karl-Hein Peil 11.30 am -11.45 am What are the goals of our meeting? Aims and perspectives (Reiner Braun) 11.45 am – 1.00 pm No to military basis – experiences from actions (reports and discussion): … END_OF_DOCUMENT_TOKEN_TO_BE_REPLACED

please find in the link a report by Dave Webb on Stopp Ramstein 2017.
http://www.space4peace.org/reports/ramstein_17.htm

The US Air Force Base at Ramstein, Germany, is a central pivot for preparing and executing wars of aggression violating international law. Most of the lethal missions of US combat drones, e.g. in Iraq, Afghanistan, Pakistan, Yemen, Syria, and Africa, are conducted via Ramstein’s satellite relay station. US drone pilotes from a multitude of military bases use Ramstein for operating killer drones in illegal war missions around the world. In Ramstein itself, about 650 personnel continuously analyze, update and pass … END_OF_DOCUMENT_TOKEN_TO_BE_REPLACED

Petition created by Ann wright, member of the ICC of the international network “No to war – no to NATO”.