After almost 16 years in Afghanistan, what will it take for our Elected Officials to represent our interests, and ask: is there a military solution for peace in Afghanistan? And, what will it take to try a different approach? Please, take a quick moment now and tell your members of Congress that you expect them to stand up and fulfill their responsibilities by repealing the 2001 AUMF, and debating whether to authorize continued, endless war in Afghanistan. Here are six … END_OF_DOCUMENT_TOKEN_TO_BE_REPLACED

No Fire. No Fury. No to Trump War on North Korea Emergency Rally Wednesday, August 23 5pm to 6:30pm Park Street Station downtown Boston   On August 21 the U.S. will begin joint military maneuvers with the South Korean military on North Korea’s doorstep. These highly provocative exercises only heighten the tensions and the danger of war in the whole area. In response organizers from the Korean peace movement, Mass. Peace Action, American Friends Service Committee, United for Justice with … END_OF_DOCUMENT_TOKEN_TO_BE_REPLACED

update the time now 4-5PM (18.08.2017) EMERGENCY RALLY & CALL TO ACTION NO WAR WITH NORTH KOREA Anti-War Rally Outside of Senator Schumer & Gillibrand’s Office 3rd Ave. Between 48th & 49th Sts Monday, August 21 from 4 – 5PM Facebook Event Linked Here We must stand against war and together defend diplomacy to save the United States and North Korea from a nuclear war started by improvised “fire and fury” comments. We cannot go to war for this Administration’s … END_OF_DOCUMENT_TOKEN_TO_BE_REPLACED

Kate wrote us: below is our letter to The Guardian, following our protest at the US Embassy.

The US Air Force Base at Ramstein, Germany, is a central pivot for preparing and executing wars of aggression violating international law. Most of the lethal missions of US combat drones, e.g. in Iraq, Afghanistan, Pakistan, Yemen, Syria, and Africa, are conducted via Ramstein’s satellite relay station. US drone pilotes from a multitude of military bases use Ramstein for operating killer drones in illegal war missions around the world. In Ramstein itself, about 650 personnel continuously analyze, update and pass … END_OF_DOCUMENT_TOKEN_TO_BE_REPLACED

COMS 2018 Date/Time Date(s) – 12/09/2017 11:00 am – 5:00 pm Location Pax Christi International Dear colleagues, dear friends The Global Campaign on Military Spending (GCOMS) is an international campaign founded in December 2014 and promoted by the International Peace Bureau. The main aim is to reduce the global military spending thanks to the cooperative works made by the organisations of civil society. Nowadays, more the 100 organizations from 35 different nations have joined the campaign. The GCOMS is run … END_OF_DOCUMENT_TOKEN_TO_BE_REPLACED 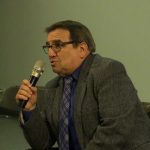 Considering the recent events such as Macron’s recent election and from a French perspective, what is your opinion of the G 20? In Hamburg, the newly-elected French president, so far presented as “young and modern”, only perpetuated the habitual, neoliberal politics of his predecessors, Sarkozy and Hollande. No new ideas or initiatives were mentioned by President Macron in reaction to the dramatic failures of past unfair commercial practices, notably in Africa or concerning his support for the Paris Accord on … END_OF_DOCUMENT_TOKEN_TO_BE_REPLACED

The MacBride Prize Ceremony will be held on Friday, 24th November in Barcelona.