END_OF_DOCUMENT_TOKEN_TO_BE_REPLACED

Peace Organisations Gathered in Brussels to Say No to NATO By Alessandra Giannessi The last NATO Summit, held in Brussels on 25 May, has been an important one. Presented as an opportunity to celebrate the long-awaited inauguration of the new headquarters in Brussels, two main topics have been discussed: the burden-sharing of military expenses and enhancing NATO’s focus on fighting… [read more… ] http://www.transform-network.net/blog/article/peace-organisations-gathered-in-brussels-to-say-no-to-nato/

END_OF_DOCUMENT_TOKEN_TO_BE_REPLACED

At the NATO Summit in Brussels US President Trump wants to collect imaginary debts and the European heads of state reiterate their willingness to spend 2% of GDP on armament. A large wave of armament is coming, for Germany 2% military spending means an increase from 37 billion Euro to 69 billion Euro, for Europe an increase of 200 billion to more than 300 billion Euro. The Europe of crisis and joblessness should pay for preposterous interventions and wars while … END_OF_DOCUMENT_TOKEN_TO_BE_REPLACED

150 Nonviolent activists, amongst whom are activists from Agir pour la Paix, are currently disturbing the access to the NATO Summit through direct non violent actions. The summit is taking place in Brussels’ brand new headquarters. Their aim is to make themselves visible to the delegations on their way to the summit. Through their radical, direct and nonviolent actions, they want to get across with conviction that NATO is actually a war machine, and that far from ensuring peace and … END_OF_DOCUMENT_TOKEN_TO_BE_REPLACED

NATO IN ALL ITS FORMS Protest in Brussels the 24th & 25th of May and in Carhaix the 28th   Defense policies have rarely been as much up for discussion as they are now. D. Trump’s first trip abroad began with a visit to one of its main allies, Saudi Arabia, with several hundred billion dollars in contracts, mainly for military supplies. Then, Israel, whose military equipment is known to be largely financed by the US. To conclude with the … END_OF_DOCUMENT_TOKEN_TO_BE_REPLACED

END_OF_DOCUMENT_TOKEN_TO_BE_REPLACED 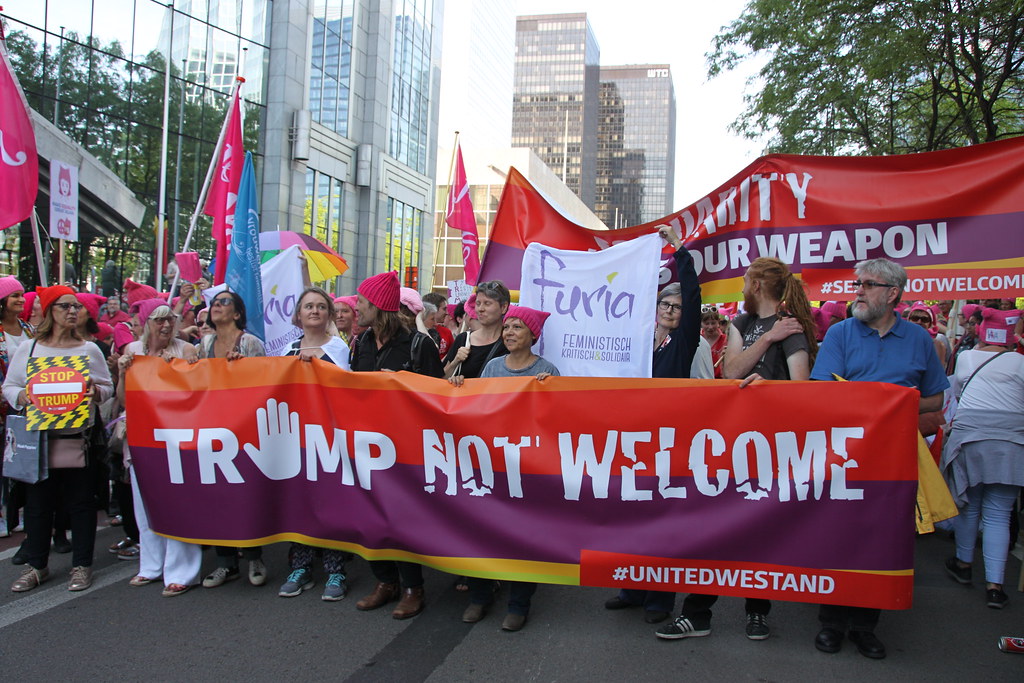 An artikel by MONIQUE ET ROLAND WEYL, DROIT-SOLIDARITE (Association adhérente à l’Association Internationale des Juristes Démocrates) c/o weyl-porcheron 160 rue du Temple, 75003 PARIS – fax 0142780357 (site : droitsolidarite.free.fr) If we compare the International Rule of Law with that of its domestic conception, it could be said that NATO is similar to what would be considered an armed band in a state and that even the defensive pretext which attempts to justify its creation could not make it any … END_OF_DOCUMENT_TOKEN_TO_BE_REPLACED 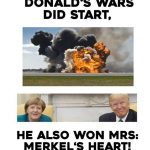 END_OF_DOCUMENT_TOKEN_TO_BE_REPLACED

24 May 2017 Brussels 5 PM North Railway Station Meeting point for the Peace movement / anti-Nato block is at the Proxiumus building at the North Station. Program and more information: here  Call for the march taken from: https://www.trumpnotwelcome.be/ At the end of May, Donald Trump, president of the United States, comes to Belgium to attend the NATO summit. These past months, Trump caused outrage all over the world: dividing and excluding people, denying climate change, intimidating the media, phasing … END_OF_DOCUMENT_TOKEN_TO_BE_REPLACED

On the 25th of May, simultaneously with the NATO summit in Brussels, we organise an alternative international conference. Several international guests will delve into NATO and the problems related to this trans-atlantic organisation.

The counter summit will start with a plenary session in which four experts will be talking about various issues such as NATO military interventions, military spending, the tensions with Russia and nuclear weapons.

Read the program: Programm-Counter-Summit-Brussels-2017-web.pdf (2 MB) (We thank the European Left for their financial support)

The counter summit is a unique opportunity for exchange and actions. For those looking for accomodation, for meetings with other peace activists and to prepare actions can join the peace camp from Sunday 21 May to Friday 26 May. Registration is obligatory. More information here. More on direct actions can be found here.

Mary Ann Wright is a retired United States Army colonel and retired U.S. State Departement official, known for her outspoken opposition to the Iraq War. She is most noted for having been one of three State Department officials to publicly resign with an open letter to protest the US war plans against Iraq. She’s member of the National Staff of CODEPINK: Women For Peace

END_OF_DOCUMENT_TOKEN_TO_BE_REPLACED

The peace plenary / anti-war alliance in Tübingen has produced the colorful “Paceflag” with the imprint “NO TO NATO” , and is interested that peace activist bring them into the air. Price: 10 euros. Interest? Please email to Walburg Werner

Call for March in Copenhagen may 24. Starting in Nyhavn with a meeting from 4-4.30 pm crossing the walking bridge to the Defense Command and returning same way. Yes to peace and welfare – No to NATO rearmament! NATO holds the 2017 summit inaugurating the new 5 billion dkr headquarter. The summit will consolidate the agreements on cooperation and integration between NATO and the EU military efforts. The agenda is expanding armor and war threats from NATO, the world’s strongest … END_OF_DOCUMENT_TOKEN_TO_BE_REPLACED

END_OF_DOCUMENT_TOKEN_TO_BE_REPLACED 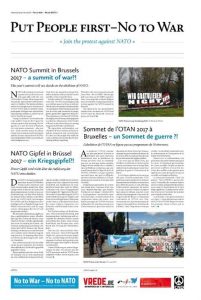 Feel free to spread the online version of the pdf. 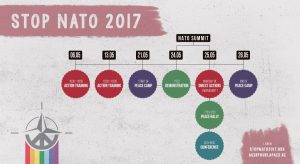 A series of direct actions, starting on Sunday, May 21st. If you want to join in, let us know via:

Participation in the big “TRUMPism Not Welcome” march on Wednesday, May 24th at 5PM. This protest march will be held in coordination with the woman, student, climate, social and refugees movements (among others). We’ll try to have the messages of the peace movement as visible as possible. Suggestions or co-operation?

A Conference & workshops with international guests on Thursday, May 25th. See the draft program here based on the proposals made during the preparatory meetings. You’re invited to suggest adjustments, names and co-operation:

A peace camp will take place from May 21st till 26th 2016. For more information contact:

END_OF_DOCUMENT_TOKEN_TO_BE_REPLACED

This appeal was agreed by the 2nd international preparatory meeting for actions against the NATO summit 24/25 May 2017 in Brussels.

Call for international actions against the NATO Summit, Brussels May 2017

Put people first, no to war!

This year’s NATO summit will be US President Donald Trump’s first. It will be held in May at NATO’s brand new headquarters in Brussels, a city that hosts both NATO and the European Union – two institutions that co-operate closely on their military policies.

Press release of the International Coordinating Committee of the international network No to war – no to NATO January 2017/01/30 Protest against NATO at its next summit in Brussels on 24/25 May 2017 The duty of the peace movement is to formulate fundamental, peaceful alternatives to the militarists and proponents of war who come either from backgrounds of neoliberal globalization or national populism. In each case, war is the continuation of politics, and militarism is an essential element of their … END_OF_DOCUMENT_TOKEN_TO_BE_REPLACED

Dear friends, According to the Belgian Press, the planned NATO summit in Brussels will take place on May 24 en 25 2017!! If this information is correct, we’ll have 4 months left to prepare succesful counter actions. Last year, December 17, we had a very fruitful preparatory international meeting with interesting discussions and proposals. In annex you’ll find the report of the last meeting. If you have comments, you can always send them to As agreed, the next meeting … END_OF_DOCUMENT_TOKEN_TO_BE_REPLACED

an article by Reiner Braun, Co-President International Peace Bureau (IPB) NATO Summit 2017 in Brussels – a familiar but as yet undated affair It is already clear that the next NATO Summit will be one of the most significant summits in the organisation’s long history – even if the exact date of the meeting in Brussels is not yet clear. It certainly will not be a summit where the organisation decides to wind itself up. Rather, it will celebrate its … END_OF_DOCUMENT_TOKEN_TO_BE_REPLACED

The first international preparatory meeting for organizing actions against the next NATO Summit in Brüssels took place at December 17th 2016 in Brussels.   all photos ©Friederike Benda

END_OF_DOCUMENT_TOKEN_TO_BE_REPLACED

At the CND (Campaign for Nuclear Disarmament) UK Annual Conference in Manchester last weekend the following resolution was passed overwhelmingly. There was one comment from Student CND that this would be difficult for them as May/June is the main time of the year for exams. NATO SUMMIT We have just learnt that the NATO Summit in Brussels in 2017 will be earlier in the year than usual.  It will probably be in May or June, to coincide with the opening … END_OF_DOCUMENT_TOKEN_TO_BE_REPLACED

Location: Rue de la Linière 11 – 1060 Brussels At the last NATO summit it was announced that there will be a next NATO summit at the new NATO Headquarters in Brussels in 2017. As far as sources say, the summit may happen in the first half of next year, rather giving us a short period of time for planning and mobilizing for actions against the NATO summit. Therefore we would like to invite you to an international preparatory meeting … END_OF_DOCUMENT_TOKEN_TO_BE_REPLACED

International Network No to War – No to NATO

The next NATO summit was announced to take place in 2017 in Brussels where a new headquarters is being built. Since 2009 there have been diverse actions of protests of the No to War – No to NATO network around NATO summits including a counter summit, demonstration, and actions of civil disobedience. With this workshop we want to give information on NATO and its summit and discuss mobilization.

Kristine Karch, No to War – No to NATO

Lucas Wirl, No to War – No to NATO

Dear Friends and colleagues, please find below an information of the World Congress of the International Peace Bureau. Our network will participate in the congress by organizing a workshop on “NATO and Militarization – Mobilizing for the next NATO Summit in Brussels 2017”. Please participate in the thunderclap for mobilization and spread the word outside the social networks as well. Greetings, Lucas Dear friends and colleagues, the IPB world congress Disarm! For a Climate of Peace – Creating an Action … END_OF_DOCUMENT_TOKEN_TO_BE_REPLACED