The International Network No to War-No to NATO, together with the Latin American Circle of International Studies and the Argentinian Permanent Assembly for Human Rights, is organizing, in Buenos Aires, Argentina an Inter-Continental Conference from December 13th to 14th 2012, focused on the global policies and strategies of NATO and their implications for the Global South, especially in Latin America, and the political, social and human alternatives that the Global South offers for peace, security, and the environment. 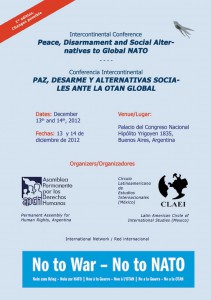 NATO has never been a source of peace and security, and it is increasingly obvious that this dinosaur exists to preserve the economic and strategic interests of the Western powers, especially the USA. It undermines the UN-system, is undemocratic, aggressive, and perpetuates an out dated and unjust international order that should no longer prevail.

NATO knows it is stuck in a deep crisis of legitimacy, as it attempts to justify itself in order to rationalize its existence. With its new strategic concept adopted in Lisbon, Portugal, in 2010, the alliance has expanded the range of its missions and the geographic regions in which intervenes, In doing so it blatantly violates International Law as enshrined in the UN Charter. It is also establishing “partnerships“ with countries and international bodies to reinforce its global domination strategies. And, although nuclear weapons pose the most dangerous threat in human history, and nearly all the world’s nations are engaged in an official process for a multilateral disarmament through the NPT, NATO insists on relying on its nuclear arsenals as it pursues “deterrence”.

NATO’s globalization has consequences in Latin America, and very direct repercussions as a result of the US military presence in the South. The Washington Treaty clearly states that all military bases belonging to one NATO Member State can be used in the framework of NATO missions. This means that the US military facilities across Latin America are potential NATO bases, even though they do not officially display the NATO insignia. US and EU driven neoliberal and neocolonialist interventions in the Global South impact Latin American society, economies and politics, accelerating violence –especially against women–, drug trafficking, arms smuggling, internal migration, and militarization of the region. The women are always a prime target of all types of Human Rights violations; it is blatant in Latin America. These will be discussed and analyzed during the Inter-Continental Conference with the participation of Europeans, Latin Americans and North Americans (from the USA and Canada).

There is another reality, an encouraging and inspiring one that deserves and monitored and nurtured needs: Civil society in Latin America has been taking clear stances and innovative participatory democracy actions. The women are strategic actors in the creation and elaboration of the innovative progressive political, societal, environmental alternatives, especially in Latin America. There are many alternatives in the Latin American society today, ways of living with more solidarity, and in a peaceful relationship with Nature, based primarily on the Indigenous People’s ancestral ties to land. Addressing environmental issues from this perspective is important to the region’s peace-building. For the Global North, these approaches provide concrete alternatives that can inspire and serve as models.
On the regional level, the conference will focus on the political alternatives, especially regional integration, rising powers like the most recent CELAC, ALBA, and UNASUR, as they represent alternate forms of political and economic links and structures, based on solidarity, and making human needs the priority. They show a totally new conception of regional peace and security structures, of the international relations based on real cooperation, equity, mutual respect, and multilateralism.
The gender aspect is an important issue of the conference and a transversal topic of all the panels and debates on the conference.
Today’s predominant model, which relies on nuclear weapons and NATO, on wars, aggressive economic and financial policies to appropriate resources is broken. It is time to put the human beings in the heart of the new world that we call for. We, as International Network No to war – No to NATO, are very active on these issues and in proposing credible alternatives. The Buenos Aires events will deepen the global civil society movement for a NATO-free, peaceful and sustainable world.