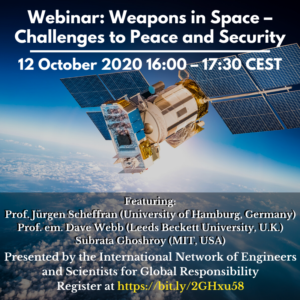 INES Webinar on
Weapons in Space – Challenges to Peace and Security

When President Trump established the U.S. Space Force December, 2019, he said that it marked “a big moment” and that there was “going to be a lot of things happening in space. Because space is the world’s newest warfighting domain.” Trump also appears to be keen to develop a new generation of space weapons – episode 2 of Ronald Reagan’s Star Wars project (SDI). Russia, China and India already have extensive military space programmes and have even tested anti-satellite weapons and the U.K., France, NATO, Japan and South Korea have either established or are working towards their own military Space Forces. The possibility of a war in or from space is becoming a huge threat to international security and the recent claim by the U.S. that Russia tested an anti-satellite (ASAT) weapon by firing a projectile from one of their satellites has added to concerns about the possible placement or use of weapons in orbit around the Earth. A treaty to prevent the development and deployment of ASATs would benefit the majority of space-faring nations, but there are major problems in defining what a space weapon is. Many of the ASAT systems being developed also have a dual-use capability for Ballistic Missile Defense (BMD), adding to the difficulty of determining whether or not a space-based object can be considered as offensive or defensive which complicates space arms control.

In 1999 the United Nations General Assembly declared October 4-10 as the World Space Week to be observed every year. This time has also been adopted by the Global Network Against Weapons and Nuclear Power in Space – an international organisation to build a campaign against the militarisation of space – as “Keep Space for Peace Week”. In this webinar we consider the technologies involved and the problems caused by the interconnectedness of the ASAT and BMD systems. We also discuss possible ways forward to help prevent war in, from, or through space. Furthermore, we assess the joint Russia-China initiative for the Prevention of an Arms Race in Outer Space (PAROS) and options for space security and arms control, leading to a space weapons ban.

Mobilisation WSF (youtube video) with Noam Chomsky and others