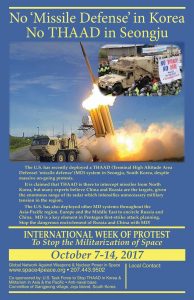 International Week of Protest to Stop the Militarization of Space