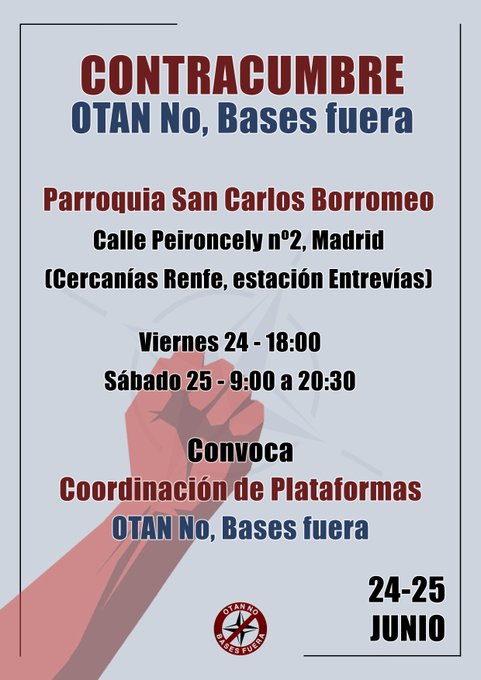 Call of the plattforms ‘NATO No – Bases Out’

Counter-summit NATO No, Bases out.

– 19:00.- Presentation: the importance of the NATO Summit, factors that make it extraordinary. Presentation of the four thematic axes

– 09:00.- Opening of the day. Methodology and organisation

– 13:40.- Plenary: selection of the main elements of consensus to be included in the Resolution.

– 16:00.- Plenary: conclusions and drafting of resolutions.

– 18:30.- Plenary: The need for a State Movement NATO No, Bases out; elaboration of a Call and action plan.

– 19:30.- Reading and approval of Resolutions and Closure

All sessions will take place in the space of the San Carlos Borromeo Parish, located in Calle Peironcely n.º 2, in the neighbourhood of Vallecas, in Madrid (Cercanías Renfe, Entrevías station).

The Coordination of NATO No – Bases Out Platforms, made up of platforms and groups that are signatories of the Llamamiento a la movilización contra la Cumbre de la OTAN (the FAI among them) calls for the Counter Summit NATO NO – BASES OUT, an open meeting to debate all the aspects that the leaders of the various countries, who will attend the Summit of Heads of State and Government, will try to hide about the true dimension of NATO and the consequences that their plans will have for the peoples and nations of the world and for immense classes of our own population..

Details on its organization, objectives and proposed contents can be found in the program.

Likewise, those who are unable to attend but consider that they have important things to say on these topics are invited to send their contributions in any form they wish (text, audio, video, presentation…).

In order to organize the management of space and content, we would appreciate responses no later than June 19.

The US imperialist strategy of world domination, after World War II, has relied on the existence of NATO as a supposedly defensive alliance and on the establishment of military bases as threatening enclaves in the main strategic points. After the disappearance of the USSR, a vast field of intervention opened up against a ubiquitous enemy: terrorism will serve to destabilize fractious governments, while at the same time justifying their actions.
The way is open for the unlimited expansion of NATO towards world domination, but the sources of resistance are multiplying, especially Russia and China.
Russia and China in particular.

2. NATO and the imperialismo of the USA and the European Union

NATO is much more than a military instrument; its actions in the economic, political, institutional, ideological and social control spheres play an essential role in the configuration of the new world order. The
imperialism prepares the response to the global crisis of capitalism: crises and conflicts are fueled to reorder the world by means of war, deploying all the disciplinary potential of warmongering, with the aid of ideological
control and war propaganda. It extends to the scenarios of the global south and is added to social control in the class struggle, within the central countries, supported by the renewed fascisms, the plague of the 21st century. In the face of this, a liberal progressivism condescending with imperialism, wielding supposedly absolute moral values to launder it.

The 2022 Summit responds to imperialism’s need to adapt its coercive capacity to impose painful measures associated with the Great Reset, capitalism’s gamble for its survival. An essential contribution to the strategy to dominate the world, by taking advantage of the synergies between the two programs. The strategical concept 2030: extended security, the rules-based world, the technological paradigm, resilience, militarization of society, social control and repression as measures of social disciplining. The declaration of Russia and China as enemies of the free world and new plans for global NATO expansion. Why the Spanish state has been chosen as a venue: Africa as a new scenario.

4. The responsibility of the Spanish state

Geostrategic position as an object of desire: the international recognition of Franco’s regime in exchange for the Bases marks the history of submission to U.S. interests, through pacts, treaties and agreements with similar content, to the point of conditioning a transition without democracy and a fictitious democracy without counting on the people. The consequences: we are necessary accomplices of the genocide perpetrated from the bases and from NATO; the risks of creating unnecessary enemies; military expenditures soar in a scenario of poverty and 125% debt. The role of the bases and NATO in the current conflicts; the case of the Canary Islands as an enclave for intervention in Africa. La destrucción de la memoria colectiva, un paso decisivo para debilitar las resistencias, mientras todo el entramado jurídico-político del estado se posiciona en favor de la OTAN y en su apoyo a la Ucrania nazi.

Discussions in 4 separate groups, according to work axes; two blocks of two hours.

Plenary: towards the constitution of a State Movement NATO No, Bases out; political foundations and organizational; elaboration of a Plan of Action.

Plenary of conclusions and elaboration of the Resolution. Closing

All sessions will take place in the space of the San Carlos Borromeo Parish,
located at 2 Peironcely Street, in the neighborhood of Vallecas,
in Madrid (Cercanías Renfe, Entrevías station).

Those who wish to participate in the Counter-Summit are encouraged to confirm
their attendance via e-mail at , indicating the area of the debate in which you wish to attend.