We – activists from the peace movement – see with great disconcertment that the top NATO representative is allowed to spread his propaganda poison at a church congress and is supported by a former German “defense minister” who is responsible for war operations.

The 60-minute event *) with NATO Secretary General Stoltenberg “How to succeed in securing peace in an insecure world?” moderated by Thomas de Maizière has already been recorded in Frankfurt/M. and will be available online from Saturday, May 15.

The former federal minister is largely responsible for the 67-page report “NATO2030” **). The proposals for a new NATO agenda outlined in “NATO 2030 present, in our view, dangerous expansionist plans that will increase tensions and the risk of war.

We are already living in a time of numerous wars and enormous rearmament. Wars and civil wars have unimaginably cruel consequences. Through the construct of “nuclear sharing”, the German government has committed itself to the nuclear war course of NATO and the USA. According to the 1996 legal opinion of the International Court of Justice, the use and threat of nuclear weapons is contrary to international humanitarian law. Any use of nuclear weapons would have devastating effects and can never be justified!

Therefore: The churches should set a sign against wars, for peace and disarmament, instead of offering a podium to rearmament advocates and militarists.

In contrast to the organizers of the event, who in their invitation speak of NATO as a “community of values of free democratic states”, we say that NATO – from Yugoslavia to Libya – has pursued a devastating policy that is contrary to international law. It also carried a devastating mindset into the heads of peace and security policymakers that knows only one direction: rearmament.

We call for actions against the NATO summit on June 14, 2021 in Brussels online and offline. 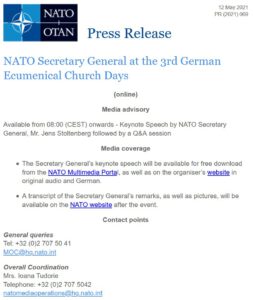