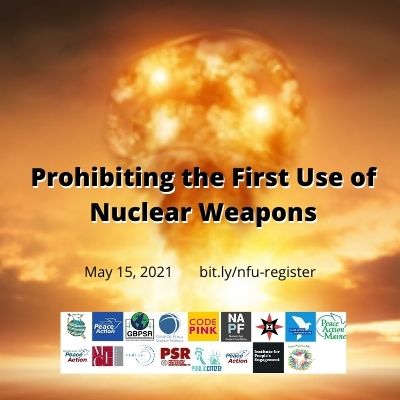 Please register for the May 15 onlne No First Use Conference. On more than 30 occasions during international crises and wars the U.S. has prepared and threatened to initiate nuclear war, most recently Donald Trump’s “fire and fury” threat and preparation to attack North Korea with nuclear weapons. In 2017 and 2019 Joe Biden stated that the sole use of U.S. number weapons should be deterrence. Our conference will serve as a launching pad for a nationwide campaign to win passage of the Senator Warren-Rep. Smith No First Use bill, and to press President Biden to codify a no first use doctrine.  No First Use is but a small disarmament step, but with the increasingly dangerous confrontations with China (which has a no first use doctrine) and Russia, it would greatly reduce the danger of nuclear catastrophe.

We have a great line up of speakers: