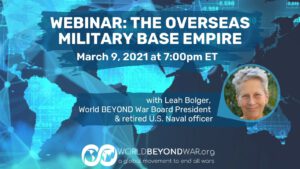 How to join: Click here to register for the Zoom link!

Did you know that the United States has over 200,000 troops stationed on more than 800 bases in more than 80 countries and all seven continents? The CNY Beyond War & Militarism Committee invites you to join us for a webinar on March 9 on “The Overseas Military Base Empire” by Leah Bolger, President of the Board, World BEYOND War and retired U.S. Naval officer. Sharing from her personal experience of being stationed on bases around the world, Leah will present on the social, environmental, and economic impact of U.S. bases — and how to close them.

What: Webinar: The Overseas Military Base Empire by Leah Bolger, sponsored by the Beyond War & Militarism Committee
When: Tuesday, March 9 at 7:00pm-8:00pm Eastern Time
How to join: Click here to register for the Zoom link!

These bases embody the U.S. military strategy of “Full Spectrum Dominance.” They must be closed because:

Base closure is one of the three main pillars of World BEYOND War’s work because we see it as a critical step towards the elimination of war. In a tangible way, bases are a method of pre-positioning troops and weaponry in preparation for war. The U.S.’s vast network of bases – over 90% of all foreign bases – “locks the United States in a self-perpetuating system of permanent war,” according to author and base expert David Vine.

On March 9, join the CNY Beyond War & Militarism Committee and World BEYOND War for this informative presentation about the extent of the U.S. foreign military base network and why these bases must be closed down. RSVP!

See you on Zoom!

For a world beyond war,