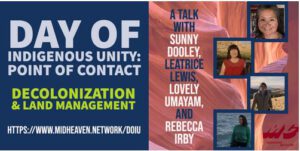 Date: October 12th, 2020, US Indigenous People’s Day (formerly titled “Columbus Day”)
Summary:
October 12th 2020 marks 528 years since Columbus first arrived on the American continent and sparked half a millenium of genocide, denial of human rights, theft and desecration of sacred land, and destruction of the natural environment. This day has been reclaimed as Indigenous Peoples’ Day in the United States, raising awareness of the continued oppression of Native and Indigenous peoples in the continent, and celebrating their contributions to society and the world.
To celebrate US Indigenous Peoples’ Day in this webinar we have invited members of Indigenous Communities from around the world to talk about work as frontline defenders against climate change and the central importance of indigenous knowledge of land management in the fight to limit its effects.
This is the second webinar in our series ‘Building Back Better’ which looks forward to the world after the COVID-19 pandemic, and asks what we need to do to create a more peaceful, just and sustainable future. Alongside zoom and facebook livestream, this webinar will be broadcast on Midheaven network as part of their livestream for Indigenous Peoples’ Day.
Confirmed Speakers:
Senger Winnie, Not1More, Kenya
Miriam Liempe, CTA-A, Argentina
Strong Buffalo, Oyate Hotanin and World Uranium Mining, United States
Professor Esther Yazzie-Lewis, Co-Author of The Navajo People and Uranium Mining
Moderator:
Rebecca Irby, PEAC Institute, United States
Webinar Invite & Link:
When: Oct 12, 2020 10:00 AM Eastern Time (US and Canada) / 16:00 CEST
Topic: Confronting the Climate Crisis
Register in advance for this webinar:
https://zoom.us/webinar/register/WN_CwPhler1RiCNBg5Ci2gogQ
Webpage to register with bio and picture: https://www.midheaven.network/doiuc