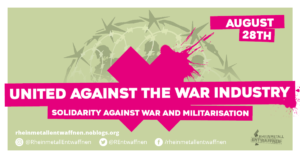 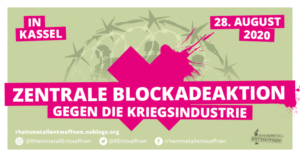 United against the war industry

On August 28th, a mass action will block the war industry in Kassel, Germany. For us, to
take action against the war machine is to take responsibility, and play our part alongside
others resisting in diverse ways around the world — to reject the ruthless system of
oppression and destruction, and join a global struggle which has for decades off ered an
alternative to capitalist modernity.

An invitation to do the right thing

Even if powerlessness, fear, and atomisation were, and remain, the essence of the
coronavirus experience for most, one thing is clear to us: we want no ‘return to normality’,
because normality itself is the problem — a state defi ned by nationalism, oppression, and
war. We know that war begins in Germany, right here in Kassel’s Rheinmetall and Krauss-
Maff ei Wegman factories. We block these corporations to block war: by cutting off the
supply chain we stop the war machine. Our action in August continues the history of anti-
war resistance in Kassel.

Rheinmetall is Germany’s largest arms producer. It supplies weapons and ammunition to
belligerent countries and their active warzones, skirting Germany’s (few, and inadequate)
export restrictions by siting production overseas. Krauss-Maff ei Wegman (KMW) follows a
similar strategy, sending tanks and weapon systems to confl icts worldwide, including an
ongoing supply of the war in Yemen. Alongside Rheinmetall, KMW operates a joint venture
developing the PUMA main battle tank. Moreover, the Rheinmetall Group has repeatedly
confi rmed its interest in acquiring KMW. These groups armed Germany for both world
wars, and with forced labour during the Nazi era. Their common history serves to highlight
the close relationship of anti-fascism and anti-militarism.

Anti-fascism is more necessary today than ever: as right-wing networks form in Germany
— for example in the German Federal Armed Forces and other insecurity institutions —
public discourse moves further to the right, and alignment with the inhumane demands ofAlternative fur Deutschland for a shooting order at Europe’s external borders. Meanwhile,
Turkey’s military attacks our Kurdish friends. Two wars of aggression contravening
international law– in north-east Syria and northern Iraq — and supply of Libya’s ongoing
confl ict, in violation of a UN arms embargo, illustrate Turkey to be a dangerous,
expansionist state, which incarcerates its left-wing opposition and trashes press freedom
even within its borders. This military apparatus is supported by German arms exports,
currently enjoying Rheinmetall ammunition deliveries originating in South Africa.

Meanwhile, the COVID-19 pandemic has made us acutely aware of what is relevant and
necessary. We want an immediate halt to production in the defence industry — we need
those resources and attention directed to what’s relevant: good health care for all. We
need ambulances instead of tanks, current equipment in hospitals rather than rifl es, and
worthy wages in the care sector over bombs.

Despite Germany’s seeming to have overcome the worst, this is by no means certain, and
the number of new infections globally continues to reach record levels. The pandemic
poses an additional, and particular, threat to people fl eeing persecution or in warzones.
Lack of medical materials, equipment, and personnel, straitened conditions of hygiene,
and want of space in shared accommodation toll against the weakened constitutions of
people in confl ict regions. This is true not only of refugee camps on the Greek islands, but
also of those holding out in the warzones and camps of north-east Syria.

Free movement for people not guns

Refugee camps on Greek islands must be evacuated immediately. The de facto support of
fascist and warring states, via dirty deals which aim to repulse refugees — as seen with
the EU and Turkey — must end now. Across our continent, the highly-militarised EU border
regime, which includes German technology and armaments in its mission to implement
Fortress Europe, must be fought and abolished. We want safe escape routes for refugees,
and call on states like Germany to take responsibility for the direct consequences of their
war and armament policy — namely expulsion and fl ight.

For the end of war

This is the beginning of the end. We want the end of the global armament race. Yet, the
fi ght against war is always also a fi ght against capitalism, against patriarchy and against
racism. Militarism emancipates none, but struggle against it brings us closer to a free
society, outwith the capitalist-patriarchal order!

United against the war industry

Unlimited solidarity against war and militarisation

Further information, event times and muster-point will be published soon on the website:
rheinmetallentwaffnen.noblogs.org