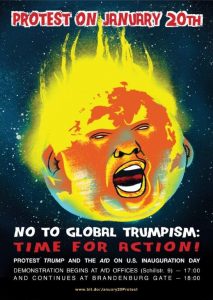 Donald Trump likes the spotlight. But as he takes the stage as the new U.S. president, cameras will be turned toward protesters worldwide reminding him and all leaders that racism, misogyny, homophobia, anti-Semitism, Islamophobia, and fear-mongering will not be tolerated.

“Trumpism” is not an isolated national movement. We stand united against opportunists including Frauke Petry and the AfD, Marine Le Pen, Geert Wilders, and Nigel Farage who scapegoat and demonize immigrants and religious and ethnic minorities to build their own political power.

Now is the time to come together. Our task is urgent: we are witnessing a wholesale debasement of democracy and hollowing out of democratic institutions in favor of corporate power. We reject the rise of violent nationalism, attacks on workers’ rights and trade unions, increasing economic and social inequality, corruption, the prioritization of profit over people, and the dangerous disregard for climate change.

Around the world, the tide of extremism is rising. Racist rhetoric is igniting xenophobia and violence against refugees and minorities. Militarization is growing. Environmental protections are at risk, and the threat of climate change is being dismissed. Economic inequality is being exacerbated. Fake news is replacing facts. Public services—social security, education, health care—face privatization. Women’s and LGBT rights are under attack.

We must speak out. We must reach across borders and build bridges against hatred and division. We demonstrate in solidarity with all those in Washington D.C., London, Madrid, Paris, and elsewhere who say NO to Trump.

Join us on January 20th to protest Trump and the AfD. Demonstration begins (Location here) at 17:00 and continues at Brandenburger Tor at 18:30.

We are now collecting the names of organisations which support the demo itself. Please send the name of supporting organisation to

Who we are? Read the statement Coalition for a United Future_16Dec2016.pdf