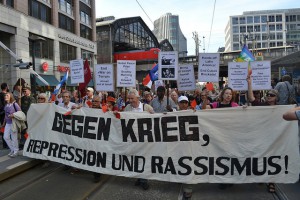 For the official visit of President Barack Obama to Berlin on June 18th & 19th, ca. 800 people protested against US policies in a lively demonstration through central Berlin. The main banner reads: “Against War, Repression and Racism!” The call for the demonstration was by a broad coalition of peace, civil rights, and solidarity movements and takes as its theme the red penalty card, used in many sports, indicating that a player has committed an offense so serious that she or he must immediately leave the game.

See also: June 18th RT video of demonstration and an interview with Elsa Rassbach, Code Pink Germany, who spoke about drones at the demonstration: http://www.youtube.com/watch?v=e1bnhOIOvPY&feature=youtu.be

YES WE CAN: Show Obama the Red Card

For many, Barack Obama’s election had inspired hope of positive changes in US foreign and domestic policies: a roll-back of aggressive US imperial aggressions and arms policies, sustainable peace initiatives for the Middle East, initiatives for global disarmament, shutting down Guantánamo, steps toward ending racism in the US penal system and domestic social justice.

Six years later, his administration has fulfilled none of these hopes – on the contrary. Murderous drone attacks have dramatically increased, the so-called “war on terror” has been intensified and, behind its smokescreen, even more democratic rights are dismantled, government expenditures on arms and warfare have skyrocketed, while poverty, desperation, and social decay is spreading in the USA.

An alliance of Peace, Civil Rights, Solidarity Movements, and Free Mumia Initiatives is calling for “red-carding” US government policies.

Begin: 17 o’clock at the Bertolt-Brecht-Platz

End: Pariser Platz in front of the US Embassy

Global military dominance has remained the declared objective of US policy, even under President Obama. US combat drones are murdering and spreading terror in Afghanistan, Pakistan, Yemen and Somalia. Under Commander-in-Chief Obama, US troops and secret service agents are active in dozens of countries of the Middle East and Africa, as well as in other regions of the world. The sovereignty of weaker nations, as well as international law and human rights are constantly violated. People are tormented in torture prisons. Guantánamo is but one example of this US government policy.

We call for an end to US drone and special commando liquidation policies; a ban on combat drones; Guantánamo’s immediate closure; compensation for the victims and their families.

Expansion of wars in Afghanistan and Pakistan, military aggression and threats, interference in the domestic affairs of other nations and even subversion – no end is in sight. 750 foreign US military bases constitute the centers of operations and interventions for current and future wars.

We call for “Bringing all troops home;” Shut all US bases abroad.

The USA is the world champion in armament. With an arms budget of $682 billion, the Obama administration has the USA accounting for nearly 40 percent of the entire world’s arms expenditures. The USA and Russia account for 95 percent of the world’s approx. 19,000 nuclear weapons. Though both countries are reducing the quantity of their nuclear warheads, the USA is modernizing its nuclear arsenal and installing missile defense shields.

Democratic and human rights are under constant threat in the USA. Surveillance technology is used to intensify repressive controls and destroy democracy. The security state is being expanded. The militarization of the police and domestic deployment of the military are increasing. The US accounts for twenty-five percent of all the prisoners on the planet (while representing merely five percent of the world’s population.) Private prison companies are making lucrative profits from these prisoners. The USA is one of the few industrialized nations still applying the death penalty. Since 1977 more than 1300 death sentences have been carried out.

We are calling for safeguarding democratic and human rights; putting an end to the racist and political penal system as well as the death penalty; Freedom for Mumia Abu-Jamal, the Cuban 5 and all other US political prisoners!

Bradley Manning, a 25-year old US soldier, exposed war crimes, torture, corruption and secret service intrigues of the Iraq and Afghanistan wars to the public. Those responsible for these crimes are handled with impunity, while Bradley Manning is persecuted. For more than three years, he has been in pre-trial confinement, suffering at times under inhumane prison conditions. He is charged among other things, with espionage and aiding the enemy.

Progressive governments have come to power in many Latin American countries. This has brought about a change in the relations between the Latin American countries and in their relationship to the industrialized countries of the northern hemisphere. Regional integration projects are providing alternatives to the discriminatory North-South relations. US policy, using intelligence services and exerting direct influence, is attempting to protect the interests of the international raw materials conglomerates and torpedo Latin American governments’ policies.

We call for a halt to US interference in the democratic developments of Latin America and an immediate end to the blockade of Cuba.

German foreign and security policy is multifariously implicated (predominantly within a NATO framework) in US policies of arms buildups, military interventions and the imposition of economic and natural resources interests on southern hemisphere nations. This is why it also seeks to procure combat drones. US drones in African air space are piloted from US bases in Germany (AFRICOM in Stuttgart and Ramstein). The German government appears to be quietly tolerating this, making itself complicit in this internationally illegal aggression.

We call for: No combat drones for the German military; no use of German territory for the illegal US drone missions; end all foreign interventions of the Bundeswehr. The German government must orient its foreign policy strictly on a non-violent peace policy. Germany must make an active contribution toward creating the conditions for a just and equitable development process in the countries of the southern hemisphere.