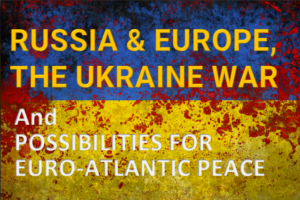 Reiner Braun is a leading European peace advocate and until recently, the Executive Director of the International Peace Bureau. He recently returned from a series of meeting in Moscow. Join us to hear what he learned in Moscow, current European perspectives on the Ukraine war, and campaigning for a Christmas truce and possible peace negotiations – including the need for a new European security architecture.

Reiner Braun has been involved in the peace movement since 1982. He work for the Krefeld Appeal against nuclear weapons, was a founding member of the International Network of Engineers and Scientists for Global Responsibility, and from 2006 until 2017 he was executive director of the German section of the International Association of Lawyers against Nuclear Arms. From 2017 to 2022 he served as Executive Director of the International Peace Bureau, a Nobel Peace Prize recipient organization. His books include Einstein – Peace Now and Disarmament and Development. He is currently leading a worldwide IPB Common Security initiative.