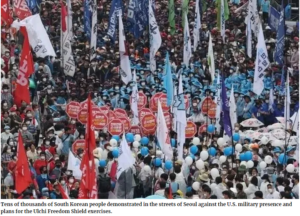 Speaker: Dr. Francis Daehoon Lee, South Korean peace researcher and a former advisor to the Moon Jae-in government
Director of Trans-Education for the Peace Institute of PEACEMOMO in Seoul and a former advisor to the Moon Jae-in government, Dr. Francis Daehoon Lee will be speaking about approaches by the Korean peace movement to bringing peace and demilitarizing tensions among U.S., South Korea, and North Korea.
Dr. Lee has been a research professor of peace studies at SungKongHoe University (Korea), visiting professor for peace studies at Ritsumeikan University (Japan), and a visiting professor at the International University of Japan. He was a founder and coordinator for People’s Solidarity for Participatory Democracy and a legal advisor to the Special Rapporteur of the UN Human Rights Sub-Commission in 2005. Having worked with the Center for Peace Museum in Korea, he is also the former executive director of ARENA (Asian Regional Exchange for New Alternatives, Asia-wide) and director of the Center for Peace and Disarmament in Korea. Dr. Lee has been involved in facilitating UNESCO and APCEIU teacher-training workshops since 2006. In 2012, he joined PeaceMOMO, an organization providing peace education training for school teachers and peace activists in Korea, based on new, learner-oriented pedagogical principles. Under the Moon Jae-in government, Dr. Lee served on numerous advisory committees within the ministries and agencies of reunification, education, human rights, overseas development cooperation, and gender and family affairs.