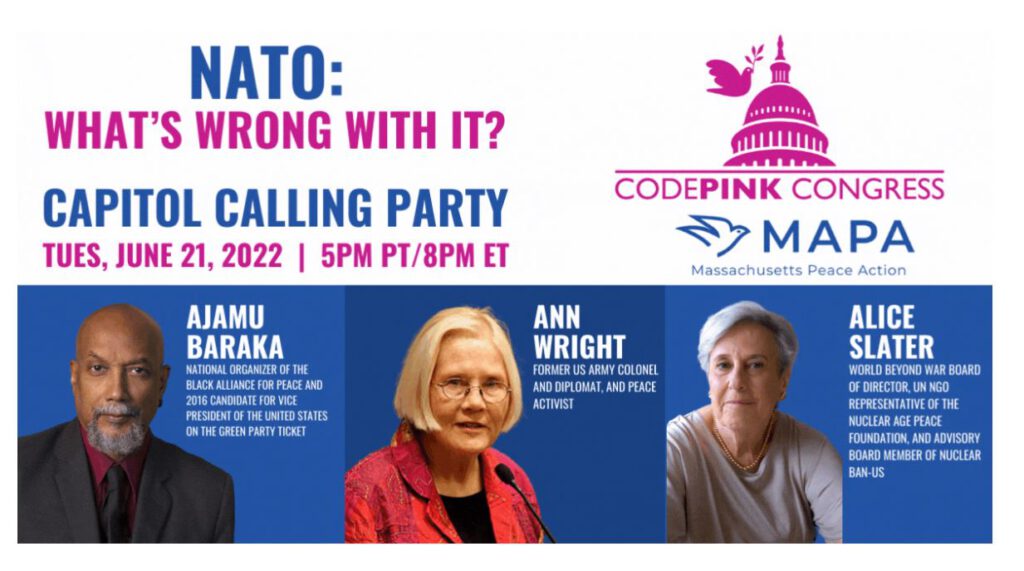 As the conflict in Ukraine is raging and heads of states of NATO member countries get ready to meet in Madrid June 28-30, we invite you to join us in discussing and deconstructing the North Atlantic Treaty Organization with three expert guests: Ajamu Baraka of Black Alliance for Peace, Ret. Colonel Ann Wright of CODEPINK and  Veterans for Peace, and Alice Slater of World Beyond War.

This discussion is more important now than ever. Join us as we look back at NATO expansion into Eastern Europe that preceded the Russian invasion of Ukraine, and challenge NATO’s war plans targeting nuclear-armed Russia and China.

While the NATO members meet to discuss war plans, peace activists in Europe are gearing up for anti-NATO summit protests and our guests will put NATO “on trial” for its past crimes in Kosovo, Iraq, Afghanistan and Libya. Don’t miss this timely event as we talk about how to step back from the brink of war with nuclear-armed states and how to move towards a NATO-free world.

Ajamu Baraka is the national organizer of the Black Alliance for Peace and was the 2016 candidate for vice president of the United States on the Green Party ticket. Baraka serves on the Executive Committee of the U.S. Peace Council and leadership body of the United National Anti-War Coalition (UNAC) and the steering committee of the Black is Back Coalition. Baraka is an editor and contributing columnist for the Black Agenda Report and was awarded the US Peace Memorial 2019 Peace Prize and the Serena Shirm award for uncompromised integrity in journalism.

Colonel Ann Wright spent 13 years in the U.S. Army and sixteen more years in the Army Reserves, retiring as a Colonel who also served as U.S. Deputy Ambassador in Sierra Leone, Micronesia, Afghanistan and Mongolia. On March 19, 2003, the eve of the U.S. invasion of Iraq, Ann Wright resigned, stating that without the authorization of the UN Security Council, the invasion and occupation of Iraq would be a violation of international law. Ann will soon attend several NO to NATO events in Europe.

Alice Slater serves on the Board of Directors of World Beyond War, as the UN NGO Representative of the Nuclear Age Peace Foundation, and on the Advisory Board of Nuclear Ban-US. A member of the Lawyers Alliance for Nuclear Arms Control, Alice travelled to Russia and China on delegations engaged in ending the arms race and banning the bomb. She serves on the People’s Climate Committee – NYC, working for 100% Green Energy by 2030.