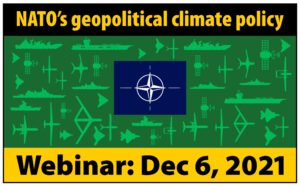 NATO´s Geopolitical Climate Policy
NATO and politically close allies as EU are about to establish a joint geopolitical answer to the climate crisis by a comprehensive so called rule based world order with NATO as the security arm. NATO aims at becoming a global system administrator far beyond its original defence purpose. You are invited to a webinar Monday December 6 at CET 18:00 (UTC 17:00).
Peter Wahl from the German Attac’s Scientific Council will introduce the subject at the webinar on 6 December on NATO’s geopolitical climate policy. There will be comments from Ellie Cijvat, former chair of Friends of the Earth Sweden and Lars Drake, chair of No to NATO, Sweden.

Some background material in English:

How NATO sees its role in resolving the climate issue and “resilience” is discussed by Anna Wieslander, head of Atlantic Council Northern Europe based in Sweden, and others at the Brussels forum organized at NATO HQ jointly by German Marshall Fund and NATO. NATO can set the standard for long-term planning and how governments, business and civil society can work together to solve the problems. All according to the moderator with citizen focus: https://www.youtube.com/watch?v=GXkiD7mYG1w&t=21882s

The approach expressed at the NATO forum is also stated in a publication on which action program is now needed https://www.msb.se/contentassets/08a362e199e04b67a19af68cf35e451f/a-transatlantic-agenda-for-homeland-security-and-resil -covid-19.pdf  “On January 28, 2021, the Swedish Civil Contingencies Agency (MSB) and the Atlantic Council invited thought leaders and experts to a virtual roundtable,” A Transatlantic Agenda for Homeland Security and Resilience Beyond COVID-19, ” to discuss underlying and emerging challenges to resilience, security, and science and technology. The participants explored how the future of homeland security across borders will, should, and can be shaped. “

https://www.heise.de/tp/features/Klimapolitik-als-geopolitische-Waffe-6227783.html
Background on the role of Sweden in helping NATO to turn the climate issue into a geopolitical weapon
Sweden has for some time had a central place in the merging of the US, NATO countries and EU campaign against those who oppose increased militarization and rapprochement with NATO. This is done by branding them as Kremlin’s Trojan horses or carriers of Russian disinformation. It is at the Swedish embassy in Washington that this merger has largely taken place, partly before an open curtain.

A key player has been the US-based think tank Atlantic Council, which since 2013 has been funded by Sweden, among others, with Carl Bildt, Wallenberg and SAAB as three Swedish members in its international council with a total of 37 members.

At these meetings, the transatlantic community of values has been emphasized with a common struggle against Russian disinformation as a collective purpose. In a chapter on Sweden in the report Kremlin’s Trojan Horses 3.0, the Atlantic Council has pointed out carriers of Russian disinformation within the Left Party, people like Valter Mutt in the Green Party and the independent environmental movement and its cooperation with the peace movement as particularly serious threats.

The basis for this was revived with the expert report NATO 2030 United for a New Era presented in November 2020. NATO’s role in a systemic response to the climate crisis was established at the NATO summit in June 2021.

In connection with the NATO meeting, the Brussels forum was organized by NATO and the German Marshall Fund together. Here, Anna Wieslander, chair of the Atlantic Council in Northern Europe with offices together with the Swedish Foreign Policy Institute and the Swedish National Defense College, played a prominent role in formulating NATO’s climate policy. NATO can set the standard for long-term planning and how governments, business and civil society can work together to solve the problems, a policy in direct conflict with the popular movements that see large corporations gaining influence over the UN and the environmental policy agenda as the cause of the social and ecological crisis.

As early as January 2021, a meeting was held at the Swedish Embassy in Washington on how organizations such as Homeland Security and MSB should respond to the climate crisis. The very broad focus on transatlantic cooperation was summarized by Anna Wieslander in a publication published by MSB.

The meetings at the Swedish embassy are described in this article in ETC:
Do not include Sweden in NATO propaganda
https://www.etc.se/debatt/inordna-inte-sverige-i-natopropaganda (Swedish)

NATO 2030 United for a New Era
Analysis and Recommendation by the Reflection Group appointed by the NATO General Secretary, 25 November 2020
Climate and Green Defense, p41
https://www.nato.int/nato_static_fl2014/assets/pdf/2020/12/pdf/201201-Reflection-Group-Final-Report-Uni.pdf

NATO’s strategy for 2030, Geir Hem, Stop NATO Norway analyzes NATO United for a New Era, is translated into Swedish in No to NATO Gazette No. 3.
https://stoppnato.no/wp-content/uploads/2021/01/NATO-strategi-2030.pdf (Norwegian)
Heim points out that NATO strives to become a system administrator with a far wider mandate than military defense issues. However, the climate section is not as well developed as in that direction.

The official document from the NATO Summit 2021 points to the system administration ambition of NATO, other organizations are tasked with responding to the climate threat more directly, but NATO has a role not only in defense issues but also in the overall action, including partner countries, civil society, academic institutions and industry are among those with which NATO will strengthen its exchange on the intertwined issue of climate and security.

Sweden and offices in Sweden for the US-based think tank Atlantic Council then play a central role in driving the merging of NATO’s security policy views and striving to have a role as system administrator for the Western world’s response to the climate crisis and other crises.

Now NATO is also striving to take the lead on the geopotical way to address climate policy. With authorities in Sweden as one of the leading forces to make NATO’s strategy also a Swedish policy.

Information list of the network No to War – No to NATO
www.no-to-nato.org,