The government of Indonesia is planning to build a military base (KODIM 1810) in the rural area of Tambrauw West Papua without consultation or permission from the Indigenous landowners who call this land their home. To stop its development, local activists are launching a comprehensive advocacy campaign and they need our help.

The Tambrauw Indigenous Community residents live in safety and peace. There has never been an armed resistance, no armed groups nor any major conflicts have disturbed the peace in Tambrauw. More than 90% of the people are traditional farmers or fishermen who depend on the environment for their survival.

Construction of a military base does nothing to meet the growing needs of the community (such as roads, electricity, schools, and hospitals) and instead will only increase violence, exploitation of its people, and devastation of the environment and agriculture. Additionally, it is believed that the purpose of KODIM 1810 is to protect mining interests in the area and not for military defense, which is a violation of the rule of law.

So how can you help?

All donations made will be split evenly between the Tambrauw Indigenous community and World BEYOND War to fund our work opposing military bases. Specific expenses for the community include transportation of elders coming from distributed remote areas, food, printing and photocopying of materials, rental of a projector and sound system, and other overhead costs.

Help close military bases and support these Indigenous activists by donating in support of our $10,000 fundraising goal.

And then share the letter campaign with your networks to raise awareness of this egregious violation of the Tambrauw Indigenous people’s land ownership rights. Act now! Flood the Indonesian government’s inboxes with messages to stop this base. 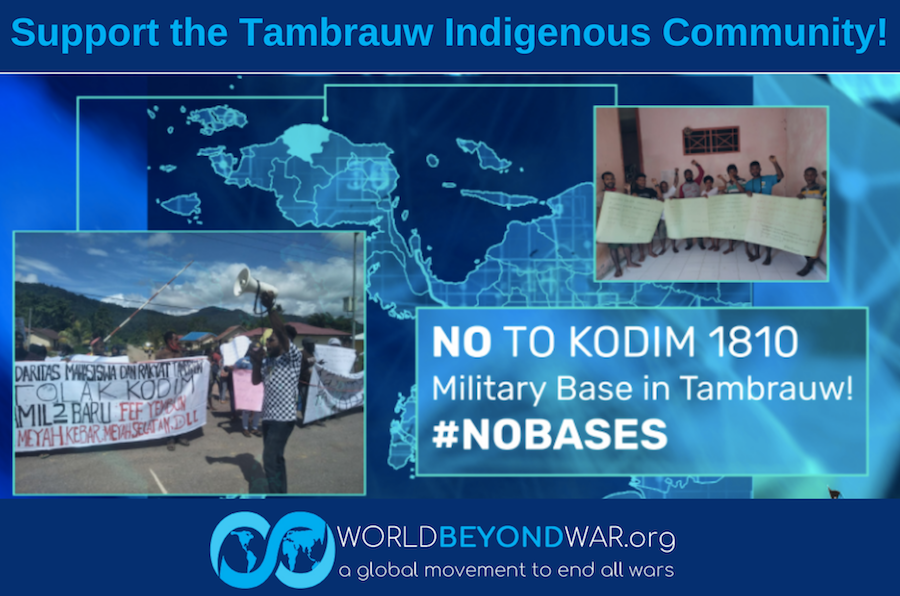