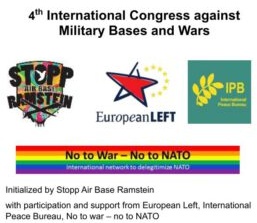 Declaration of the 4th International Congress against Military Bases and War

organized by the campaign Stop Air Base Ramstein, with the support of the international “No to War – no to NATO” network and the International Peace Bureau on 25.09.2020, held both in-person (Berlin) and online (worldwide) as a hybrid event due to Corona.

Resistance is the imperative and the challenge!

We call on the resistance against the approximately 1,000   military bases in the world to come together and fortify.

We support all actions to close the military base at Guantanamo Bay and end the associated human rights violations. All these bases serve the same goal: further confrontation against nations such as Russia and China and the continued militarization of countries and societies across the globe. Moreover, the bases serve to secure resources, trade routes, and international markets in favor of the large military powers. The driving forces behind these wars are the USA, NATO and their vassals.

The Corona Pandemic has strengthened worldwide militarization internally and externally, despite common sense arguments for a decrease in military spending to combat the virus. Military bases create immense and manifold destruction of the environment and accelerate the climate disaster.

It is time to further strengthen worldwide resistance, to strengthen our networks and to once again, take our actions to the streets on a massive scale, to organize  protest!

We are many, but we are far from enough. We are internationally networked but not yet a common, united international force. Too many of us are still on the sidelines and still see the dangers of a great war. We will intensify and better coordinate our educational and informational work. We can learn a lot from each other to become even better together. We will continue to work hard for broader coalitions and more intensive cooperation with trade unions, religious institutions, and environmental organizations. Together we can turn back the doomsday clock, which currently stands at 100 seconds to midnight, and make peace a little bit more secure.

What we want: The closure of NATO/US bases around the world as the most important step towards a world without military bases.

What we know: That only comprehensive disarmament–which must start with the strongest military forces and the abolition of all nuclear weapons–will ensure peace.

Peace needs movement. That is why we call for the first worldwide International Anti-Military Base Protest Day during the international days against military spending (GDAMS) April/May 2021.

Download: Declaration of the 4th International Congress against Military Bases and War.pdf