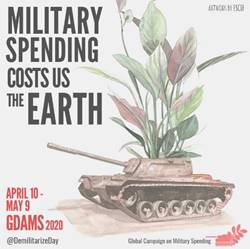 GDAMS 2020 will mark some extraordinary events and anniversaries, including:

GDAMS press conferences, with over 10 being prepared, will be the main highlight of the year.

We invite everyone to join GDAMS! Visit our events, make your own action, and tell us how you would reallocate the money for the military.