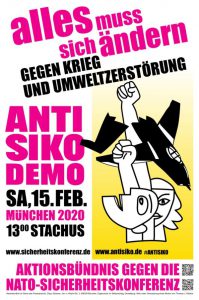 Everything must change!
No to war and destruction of the environment!

The Munich Security Conference (‟Siko”) will be held from February 14th to 16th. Heads of state and government will be meeting with representatives of big business and the arms industry, with the military, intelligence agencies, and politicians. When they speak about ‛security’, it is not about ‟peaceful solution to conflicts”, as the conference chairman Wolfgang Ischinger claims, not about the security of people here, and not about the security of people elsewhere in the world, but about the dominance of the West with its capitalist economic system, based on the exploitation of human beings and nature.

We will oppose the warmongers in politics and business!

This economic system stimulates conflicts – whether they be economic cold wars, such as the putsch-promoting and sanctions policies against Cuba, Venezuela, and Bolivia, or the critical economic and military confrontations with China, the Russian Federation, and Iran, which threaten to escalate to hot wars, such as are being waged in Syria, Afghanistan, Libya, Mali, and the Sudan. The dominant policies of regime change and obtaining access to natural resources by force imply destabilization, sanctions, economic boycotts, civil war and war. International law is violated systematically in doing so; the most recent examples are the genocide in Yemen by the Saudi-led military coalition, which our mass media ignore, the continuing war to divide Syria, and Turkey’s assault on the Kurds in northeastern Syria.

We do not want to simply watch the powerful endangering the security of humanity. We follow the tradition of those who always opposed wars and mass slaughter, and stood in solidarity with the peoples who were attacked by the Western ‟international community”.

The conversion of the Bundeswehr to an army of aggression, and the arming of the EU

Our German government covers up for and pursues these war-making policies, and sells them as ‛security’. In the government’s official Defense Policy Guidelines, it defines (since 1992) the ‟maintenance of free world trade and unhindered access to markets and raw materials in the world” as a ‟vital German security interest”. This has absolutely nothing to do with defending the country. By 2031, the government plans to double its military spending, compared to 2018. The Munich Security Conference, which serves the strategic planning of these war-making policies, is supported by the Federal government. Against this backdrop, it stages the fairy tale of peace and security, while the German military is being restructured into an army for intervention, capable of attack. In order to take on its ‟new power” and ‟new responsibility”, the German government is pushing the militarization of the EU: together with France, it has adopted the most expensive European armament program to date.

The government follows the tradition of those who re-armed and armed further the Federal Republic under the cover of ‛defense’. Twenty years ago, in a Social Democrat-Green coalition, it waged a war of aggression – together with NATO – against the Federal Republic of Yugoslavia. Later, the Chancellor responsible at the time, Gerhard Schröder, admitted that he had ‟violated international law” in doing so. In the meantime, the Bundeswehr has become an all-volunteer army, which also recruits minors, thus violating the Convention on the Rights of Children, which terms those under 18 years of age ‟child soldiers”.

The German government participates in the world-wide drone wars of the USA by paying millions to support American military bases such as Ramstein Air Base. It is improving road and rail networks so that arms transports by NATO countries in the direction of Russia will not have any difficulties; it supports the storage of US nuclear weapons in Büchel; it lets the Bundeswehr train to drop these atom bombs, and refuses to sign the UN treaty banning nuclear weapons.

That should be taken literally: the urge for profits and policies of economic blackmail destroy the economical and ecological bases for people’s livelihood. Arms exports and arms shipments have destructive effects. The wars by NATO countries serve to implement global power and business interests. They cost countless lives, devastate entire regions of the Earth, rob future generations of their vital necessities, and force masses of people to flee. Although fully aware of these consequences, the representatives of the ‟Western community of values” continue to escalate.

For example, US President Trump has withdrawn from the INF Treaty on medium-range nuclear weapons and initiated a new phase of the atomic arms race – with the support of all the other NATO countries. The renewed stationing of US medium-range missiles in Europe, which are not defensive, but first-strike weapons, brings the renewed danger of a nuclear war in Europe.

War, exploitation, and the destruction of the environment are the reasons people flee!

We are already – even without nuclear warfare – experiencing how, in addition to numerous wars, the destruction of the basis for our life, i n particular by the climate crisis, is becoming the most serious cause of flight. Germany is the fourth-largest arms exporter in the world. – Everyone who wants to eliminate the reasons for people fleeing must not ignore war, exploitation, and destruction of the environment, and their causes!

We oppose the dominant policies because peace can only be achieved with democracy, social welfare, and environmental action. Everything must change! We are fighting for a society of solidarity, in which the focus is on the interests of the many, not the profits of the few. Our campaign alliance is part of Organisationthe worldwide movement for justice and peace. We reject all military threats and every war of aggression.

Our protest is directed first and foremost at the German government, which participates in illegal wars of aggression as part of NATO. There will be no peaceful and just world of solidarity as long as NATO exists. But such a world is necessary and possible. Let us act together for it!

Join us in the streets to demonstrate against the Munich Security Conference!

Stop the extremely dangerous policy of confrontation and marshaling of troops on the Russian border. Instead of saber-rattling, we need negotiations and civilian conflict resolution without blackmail and military threats. Peace in Europe is only possible together with, and not against Russia.

The madness of the arms race must be stopped. Disarmament is what is needed now. Instead of splurging billions on military armament and preparations for war, our tax money should be invested in the social-security systems, in education, and in climate protection.

Germany must not be an accomplice in any form in criminal wars of aggression. The US air base Ramstein, the other US military bases, and all the other US and NATO command centers in Germany must be closed down.

Stop all the arms exports! The deadly deals of the arms dealers and war profiteers must be stopped and forbidden. Instead of tolerating hate campaigns against people who are fleeing the wars waged with German weapons, we stand in solidarity with the refugees.

International law must be observed, and the United Nations, as the institution of collective security, must be strengthened.

Join the demonstration on Saturday, 15 February 2020, at 1 p.m. at the Karlsplatz/Stachus in Munich!