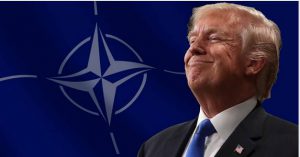 No to Trump – No to NATO – Demonstration

Donald Trump is coming to London in December for the NATO Heads of State summit. On Tuesday 3rd December, the Queen will be hosting a reception for NATO leaders at Buckingham Palace and it’s crucial we raise our voices against the world’s largest nuclear-armed military alliance which is overseen by one of the most reckless US Presidents in history.

Donald Trump is a racist, a misogynist and a climate change denier who threatens communities at home while destabilising the rest of the globe.

NATO, as an aggressive and expansionist nuclear and military alliance, plays a dangerous global role – it’s still in Afghanistan 18 years on and is expanding further into Eastern Europe, the Middle East and Latin America.

The summit is a crucial opportunity for our movement to oppose Trump, his nuclear warmongering, interventionism and destructive social and political agenda. Let’s unite against war and military aggression and ensure President Trump’s visit to Britain will be met with the response that it deserves.

4pm – Assemble in Trafalgar Square for speeches and music
5pm – March down The Mall to Buckingham Palace
5:45pm – Speeches at Canada Gate as heads of state arrive
7pm – Music at Trafalgar Square