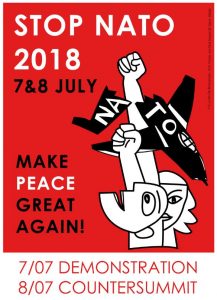 Program Counter Summit: “No to war – no to NATO”

NATO is pressing its members to spend 2% of GDP on military budgets to fund wars and aggression. Since last year increased military spending became an obligation for most EU members in the framework of PESCO (Permanent Structured Cooperation), even though EU member states submit to strict austerity policies. How we can organize more effective opposition and new strategies for conversion? Questions we want to discuss at the counter summit.

In addition, NATO’s role as a nuclear-armed alliance continues, with B61 nuclear bombs, currently being upgraded to the B61-12, to make them more ‘usable’. A nuclear free world is our vision and dream. The ban treaty creates new opportunities for the peace movement to discuss.

NATO’s expansion is against international security. This continued expansion has contributed to international tension as Russia sees itself increasingly surrounded by US and NATO bases. What to do for a new politics of common security in the 21st century?

More questions than answer. The counter summit will be a good possibility for an intensive, solidarity and controversial discussion.

You are welcome to join this International Peace Conference and to participate in the plenary lectures, workshops, podium discussions,… An opportunity to meet other peace-loving people from NATO and other countries.

Program of the counter summit:

Russia and NATO – how to overcome the policy of confrontation?
Boris Kagarlitski (Institute for Globalization and Social Movements, Russia)

The Anthropological Challenge of Women is Opposition to War and Militarism
Giovanna Pagani (WILPF, Italy)

Every lecture 10 minutes, followed by a discussion between the speakers and the participants.

2.00 – 3.30 Workshops
The workshops combine analytic elements with the discussion of strategies and actions. Most workshops will be in English, with (limited) translations when possible. Simultaneous translations in workshop 7.

Short impressions from the working groups with the focus on: what to do (max. 15 min.)
Moderation: Ludo De Brabander (Vrede vzw, Belgium)

Discussion about common activities including EU elections, NATO anniversary 2019, end of World War I, modernization of nuclear weapons and B61, no to fighter jets F 35, and 2% of GDP for military spending.

Counter summit “No to war – No to NATO”

The participation fees (coffee and a small lunch included) are €10/pp and €5/pp students and solidary tarif. This will have to be paid at the entrance.

Please register with email to

with political and financial support of