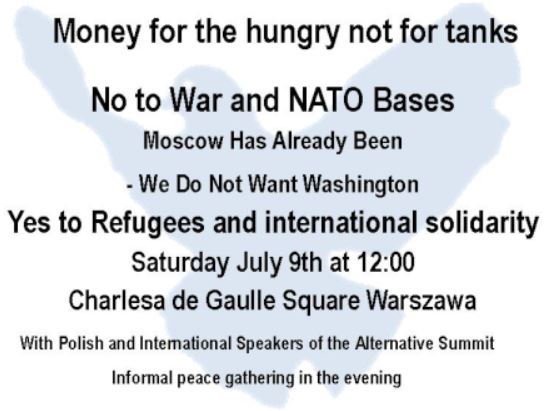 No to War – No to Militarism – Yes to Refugees

The next NATO summit is planned to take place in Warsaw on 8-9 July. This summit will be held during a period of wars, heightened global instability and conflict. The wars raged by the West in the Middle East and Afghanistan have left hundreds of thousands dead; destroyed these countries’ infrastructure and ruined the conditions for political stability and social peace. The terrorism that has spread around the world is a terrible legacy of these conflicts. END_OF_DOCUMENT_TOKEN_TO_BE_REPLACED END_OF_DOCUMENT_TOKEN_TO_BE_REPLACED

Hello Friends, On this side of the Atlantic there’s very little mainstream reporting about NATO, certainly almost nothing about NATO member Turkey serving as a corridor for fighters and arms to reach ISIS in Syria or criticism of U.S. and NATO support for Turkey after the downing of the Russian warplane after being over Turkey at most for 17 seconds, if at all. So, it’s significant that today’s New York Times ran a ¾ page article titled “NATO Nations No … END_OF_DOCUMENT_TOKEN_TO_BE_REPLACED

The latest versions are here in the pdfs