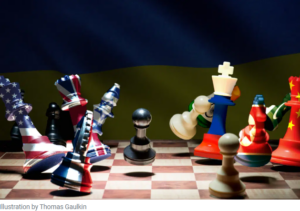 Speakers: Rajan Menon, John Feffer & Michael Klare
Moderator: Prof Avi Chomsky
Register here in advance (zoom link).
The Ukraine War has become increasingly dangerous with nuclear threats and the commitments being made for a long war. It has also deepened and accelerated the Russian-Chinese military and economic “partnership” with enormous consequences for the world, not least the increasingly confrontational U.S.-Chinese competition for Asia-Pacific hegemony.
Rajan Menon, John Feffer and Michael Klare will explore these developments, their implications, and how peace and justice advocates can best respond.

Co-sponsored by: The Campaign for Peace, Disarmament & Common Security Massachusetts Peace Action and The Committee for a Sane U.S.-China Policy