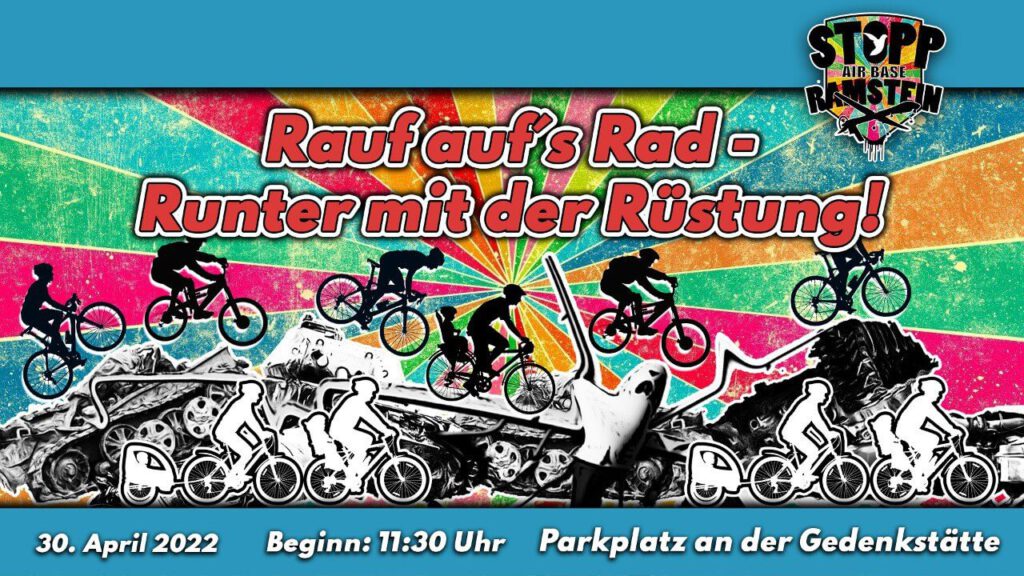 Bicycle action as part of the: “Global Days of Action on Military Spending”.

An action against drone assassinations and armament!
Let us protest as we did last year on April 30, around the airbase in
Ramstein together with our peace friends around the world protest against increasing military spending!

Bicycle action at Air Base Ramstein on April 30th!
We are back in Ramstein! In the context of the „Global Days of Action on Military Spending“ (GDAMS) we will circle the Airbase by bike in order to take a stand against rearmament and set an example for peace.
Especially in these times of war, it is more important than ever to be active for peace and disarmament! The German Government, additionally to the already planned spending of 50 Billion to rearmament, decided to adopt an 100 Billion immediate rearmament program.
The central role of Air Base Ramstein in the Ukraine- conflict is barely communicated through politics and media and therefore not present in public awareness. It is the biggest air hub of the US- military outside the Unites States and important command centers for military air traffic of the US and NATO over Europe are based here. In case of military confrontation with Russia, Ramstein would most likely be one of the first targets. Therefore, Airbase Ramstein has to be closed down!
The demonstration starts at 11:30 pm on April 30th at the memorial!
For more information: