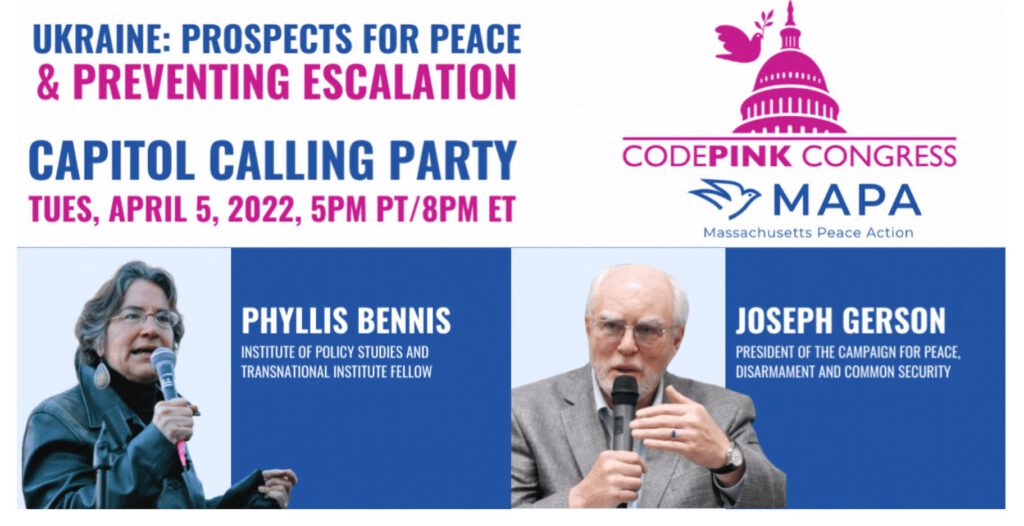 Join CODEPINK Congress and Massachusetts Peace Action this Tuesday for our twice-monthly Capitol Calling Party. As Russia’s assault on Ukraine takes a huge civilian toll, peace activists in the United States are calling on the Biden administration to articulate compromises the U.S. and NATO will support to end this crisis.

Our guests will discuss options for peace that include neutrality for Ukraine, humanitarian aid for refugees, an international security agreement, status of the secessionist regions in the Donbas, Russian reparations for Ukraine and an off-ramp for lifting sanctions on Russia. How do we reach a peace settlement before further escalation? The stakes are high for all of us.

Phyllis Bennis is a Fellow of the Institute for Policy Studies in Washington and of the Amsterdam-based Transnational Institute. She writes and speaks widely across the U.S. and throughout the world on Middle East issues including Palestine-Israel, Iran, Syria, Afghanistan, and on US wars and foreign policy. She is a co-founder of the U.S. Campaign for Palestinian Rights and the Iraq-era anti-war coalition United for Peace and Justice.