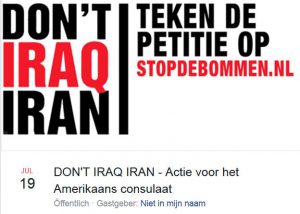 Manifestation for the US Consulate 12:45h

The American president, Donald Trump, is threatening with a new war. This time with Iran, which can have disastrous effects on the local population and the whole region. Liberty, democracy, safety and stability is not brought by U.S. bombs. The only winner of this threatening war will be the weapon industry, which is earning billions of dollars from people’s suffering.
The Dutch government is also considering to send a warship to Strait of Hormuz. This news is disturbing, especially in combination with the escalation politics of Trump, the increasing troops of the U.S. in the Middle-East and the war-rhetoric.
The threatening war with Iran is not new. Since 2001 (with the intervention of Afghanistan) the West has waged a permanent war in the Middle-East and beyond. After Afghanistan more countries followed: Iraq (2003), Libya (2011) and renewed intervention in Iraq with Syria (2014). Secret wars have been waged on Jemen, Pakistan and Somalia. The results are more than a million deaths, millions of refugees and more chaos and terrorism. After more than 18 years there has been no sight of an end to this permanent war.

We don’t want a new Iraq-war. #DontIraqIran! Sign the petition www.stopdebommen.nl, speak out and come to this demonstration!

12:45 Gather in front of the American Amerikaans consulate: Museumplein 19, 1071 DJ Amsterdam
13:00 Start of the demonstration