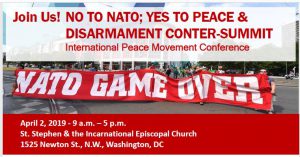 No to NATO, Yes to Peace & Disarmament Counter Summit

NATO turns 70 in 2019 and will celebrate its anniversary in Washington, D.C. on 4th, Martin Luther King Jr. Day and the anniversary of MLK’s seminal “Beyond Vietnam” speech in which he called for us to overcome the triple evils of militarism, racism and extreme materialism.

With the end of the Cold War NATO should have been retired. Instead it has been repurposed. NATO claims to strive for collective defense and for the preservation of peace and security. But, NATO has never been such a system. It is the largest military alliance in the world with the greatest military spending and nuclear stockpiles. It is the main driver of the new arms race and the main obstacle to a nuclear weapons-free world. Having expanded across eastern Europe and into former Soviet republics with military troops now at Russian borders, its new nuclear weapons and a first-strike related “missile defense shield,” NATO has instigated a new Cold War with Russia. NATO has also been transformed into a global military alliance structured to wage “out of area” wars in Asia, the Middle East and North Africa, and to ”contain” China.

In addition to its wars from Afghanistan to North Africa, NATO is sacrificing and demeaning lives across the United States and Europe by diverting billions of dollars away from badly needed health care, housing, environmental sustainability and education. NATO members, led by the U.S., already spend nearly $1 trillion per year. This is not enough for Trump, who is demanding a massive increase in the Pentagon budget and that other NATO members increase their military spending to at least 2% of their GPDs. Raising living standards and improving people’s lives must be prioritized over weapons and war which create instability and exacerbate social injustice, deprivation and environmental destruction.

NO TO NATO; YES TO PEACE & DISARMAMENT COUNTER-SUMMIT