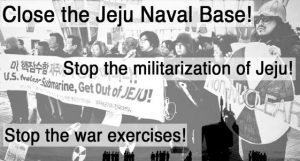 The 5th Peace of the Sea Camp will be July 25-29,  2018 on Jeju Island, South Korea.  This is the 5th annual camp; it has been held in Jeju, Okinawa, Taiwan, and Ishigaki, and activists in Jeju are  hosting  the camp again.
Here is the link to the Peace of the Sea camp on Jeju Island, South Korea July 25-29, 2018. https://sites.google.com/site/peaceforthesea/

Camp Overview
1) Where: Gangjeong Village, Seongsan, Alddreu Airfield, etc. on Jeju Island
2) When: July 25-29, 2018 (4 nights)
3) Who: about 70 citizens and activists from Korea, Okinawa, Taiwan, Hawaii,
Guam, Philippines, etc. who want to work together against the militarism of
powerful countries.
4) What: Sharing the concerns of each island(region) that is facing state violence and militarization, discussing our individual and shared visions and plans, making
relationships across language and regional divides, resting and recharging, joining and preparing for direct actions in front of the Jeju navy base, learning the painful
history of Jeju Island.

Application for the camp is at this link: https://sites.google.com/site/peaceforthesea/ 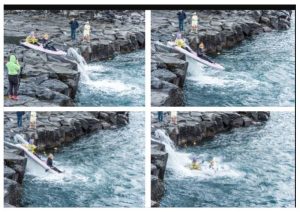 The Inter-Island Solidarity Peace for the Sea Camp started in Gangjeong Village, Jeju Island in 2014, sharing the dream to make the sea of Northeast Asia a sea of peace and to protect life, peace and democracy which are confronted by state violence, military base construction and environmental pollution, the gap between rich and poor, and reckless militarization and development by states that collude with big business to sacrifice their citizens and environment as collateral.This is the 5th annual camp; it has been held in Jeju, Okinawa, Taiwan, and Ishigaki, and now we are preparing to host the camp in Jeju again.
The subtitle for the 2018 Jeju camp is “We are Gureombi.”
Gureombi is name of the singe contiguous 1.2 kilometer-long rock which formed the coastline of Gangjeong Village. Gureombi was a wetland habitat because of the numerous springs which flowed from the rock, and it was home to many endangered species. Not only was Gureombi an ecological treasure, but it was also the place where villagers collected and ate sea-snails and seaweed, where they played and talked about life. Over 90% of the villagers rose up to protect Gureombi from disappearance when it was threatened by the construction of the navy base, and their struggle was confronted by merciless state violence. Now Gureombi lies suffocated under the concrete of the navy base which was completed by use of force. 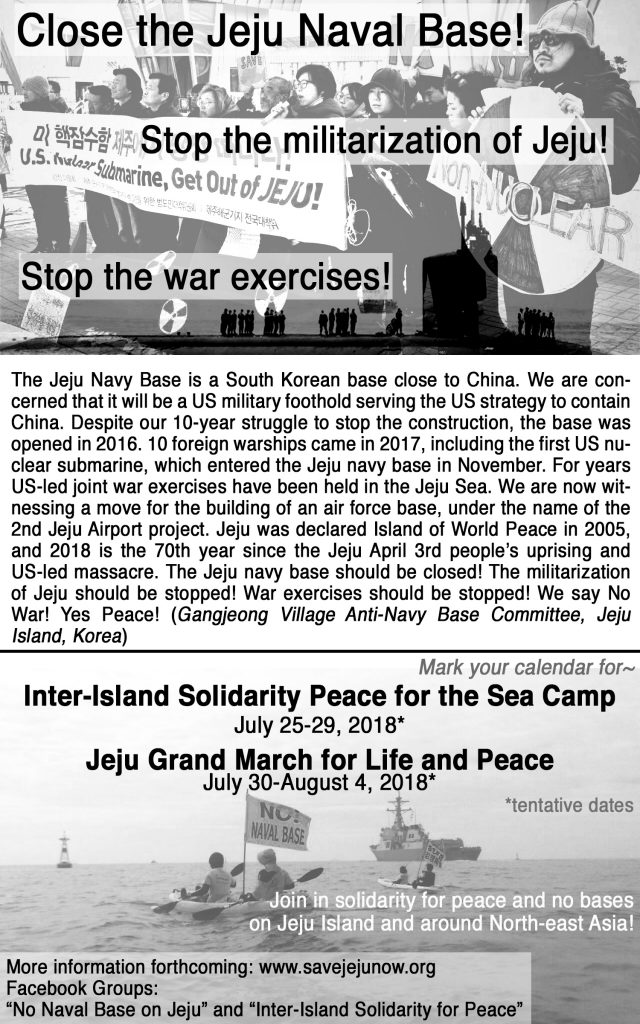